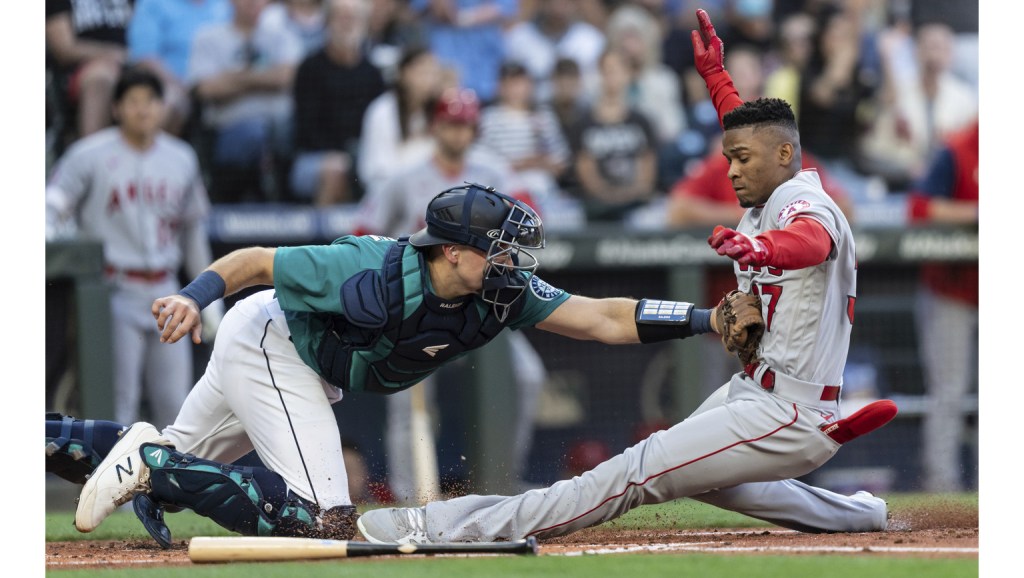 SEATTLE —The Angels were able to convert a save as they audition new ninth-inning pitchers in the wake of the trade of Raisel Iglesias.

It wasn’t the save they planned, though.

Jesse Chavez, one of the pitchers the Angels got back from the Atlanta Braves in exchange for Iglesias earlier this week, blew a three-run lead in the ninth inning in his first save opportunity with his new team. The Angels bailed him out by beating the Seattle Mariners, 4-3, in 10 innings, when they cashed in their automatic runner and then Jimmy Herget worked the bottom of the inning to pick up the save.

The blown save by Chavez cost Patrick Sandoval a victory and allowed his six-decision losing streak to remain intact, even though he did not allow a run in 5-1/3 innings. Relievers Aaron Loup and José Quijada then maintained the shutout through the eighth, with Quijada pitching a perfect eighth against the heart of the Seattle order.

Max Stassi padded what had been a one-run lead by hitting a two-run homer in the top of the ninth.

Manager Phil Nevin, who plans to use a committee in the ninth inning while he sees how it develops, gave the ball to Chavez, a journeyman reliever who had just eight career saves, none since 2019. Nevin said that Ryan Tepera, who had worked in the late innings throughout the season, was unavailable. Nevin did not specify why Tepera was unavailable, but he said he’d be able to pitch on Saturday.

Chavez issued a one-out walk to Jesse Winker and then he gave up a single to Jake Lamb. He got Jarred Kelenic on a foul pop-up, bringing him an out away from a save. Adam Frazier then yanked a double into right field, driving in one. Ty France rolled a single up the middle, knocking in two to tie the score.

“He’s a veteran guy who’s done this before,” Nevin said. “He’s gonna pitch some big innings late. And really he gets the ground ball there. It just got through.”

In the 10th, Andrew Velazquez dropped down a sacrifice and then Taylor Ward hit a sacrifice fly, getting the Angels their run.

Herget then got through the bottom of the inning without allowing the Mariners’ automatic runner to score. He got Carlos Santana on a comebacker and J.P. Crawford and Cal Raleigh on fly balls to right field.

Although the Angels still won, it should have been a victory for Sandoval, who had not won a game since May 22.

Sandoval had a 1.79 ERA through his first seven starts of the season, but since then he had posted a 5.11 mark over his next 10 outings, going 0-6. Certainly, some of that is just a regression more toward his 3.62 ERA from last season, but the Angels and Sandoval no doubt hoped for more this year.

One of Sandoval’s issues throughout the season has been his control. He’s walked 4.3 batters per nine innings, including four walks on Friday.

“Four walks and two hit batters is some tough ball,” Sandoval said. “But we battled and the defense made some plays.”

Sandoval walked two in the first inning. He gave up a single and a walk in the second. He walked another in the fourth. In the fifth, he gave up an infield hit and he hit a batter.

Sandoval escaped two of the jams with double plays, including one on his slider. Sandoval threw his slider with a career-high 42% of his season-high 105 pitches.

Sandoval hit two batters on Friday – which clearly irritated Mariners fans still thinking of the team’s fight in June, even though both were obviously unintentional. After Sandoval hit Carlos Santana in the sixth, he gave up a single to J.P. Crawford.

Aaron Loup entered and stranded the two runners, helping the Angels cling to their 1-0 lead.

Angels pitchers had little margin for error because the hitters struggled against reigning Cy Young winner Robbie Ray. They scored a run against the Mariners lefty in the first, when Luis Rengifo doubled and came home on Jo Adell’s bloop single.

They nearly scored another run in the second. Magneuris Sierra hit a ball into the left field corner and Jesse Winker fell down trying to field it. Sierra reached third base as Winker was chasing the ball down the line, but Winker fired to Crawford, the shortstop, who threw out Sierra at the plate.

Afterward, Nevin said it was a well-played game in all facets. Although the offense and the bullpen both had some notable failures, both came through when it mattered.