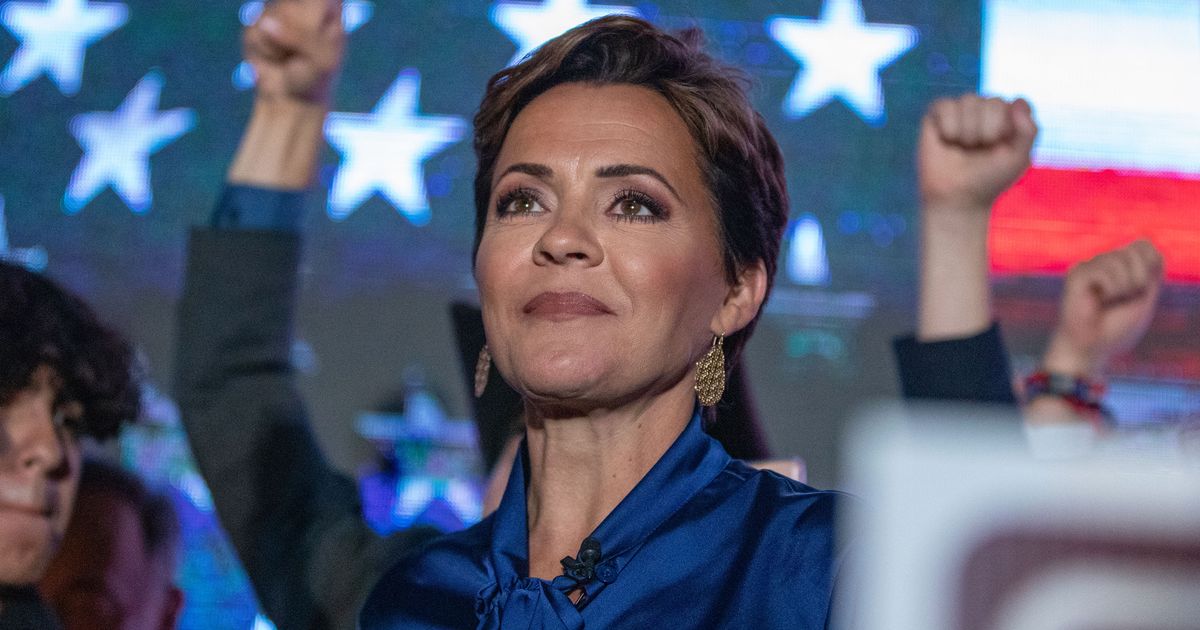 When the Associated Press finally called the Arizona Republican gubernatorial primary for Kari Lake on August 4, it became official: In four major multi-candidate GOP primaries held on August 2, candidates who firmly denied the legitimacy of the 2020 elections won. All four of them, unsurprisingly, were endorsed by Donald Trump: Lake, plus Senate candidate Blake Masters, secretary of state candidate Mark Finchem, and attorney-general candidate Abraham Hamadeh.

This is pretty stunning. In Nebraska, gubernatorial candidate Charles Herbster, a Trump endorsee who attended the January 6 “Stop the Steal” rally in Washington, lost. In Georgia, two election deniers challenging the incumbent Republican governor and secretary of state who together certified Biden’s win in the state got their butts handed to them. Election denier Doug Mastriano did win the Pennsylvania GOP gubernatorial primary, but he had an assist from Democrats, who regarded him as easy general-election prey.

Maybe it’s a western thing. Before Arizona, the high tide of electoral success for election deniers occurred in Nevada: the GOP nominees for U.S. Senate (Adam Laxalt), secretary of state (Jim Marchant), and state attorney general (Sigal Chattah) have all questioned the legitimacy of Joe Biden’s win. But Nevada GOP gubernatorial candidate (and Trump endorsee) Joe Lombardo would only say he’s worried that universal voting by mail (adopted by Nevada in 2020) encouraged fraud.

You won’t hear that kind of RINO equivocation from the Big Four nominees in Arizona. Here’s Senate nominee Masters:

America’s most powerful institutions conspired to manipulate the 2020 election. Donald Trump should be president today. pic.twitter.com/zGKGsxHOmI

AG nominee Hamadeh, who is just six years out of law school and has to rely on Trump’s endorsement as his main credential, has “embraced Trump’s ‘Big Lie’ that the 2020 election was stolen and cited fully debunked lies about widespread voter fraud to argue that Biden did not win Arizona in the 2020 election,” according to Arizona-based Copper Courier.

But Finchem really takes the cake. He’s a longtime member of the Oathkeepers, the violent right-wing group that, along with the Proud Boys, helped organize the January 6 attack on the U.S. Capitol (Finchem was there but says he didn’t enter the Capitol). As a state legislator, he introduced legislation seeking to decertify the 2020 elections in three Arizona counties carried by Joe Biden. And he’s a charter member — along with Nevada’s Marchant and Pennsylvania’s Mastriano (who if elected governor would supervise his state’s elections) — of the America First Secretary of State Coalition, a group formed to help avenge Trump’s 2020 loss by aggressive voter-suppression efforts.

If these strange birds of a feather all win, the election machinery of Arizona, which will almost certainly be a key presidential battleground in 2024, will be in the hands of people with no respect for democracy. But then that’s the question: Will they win?

Certainly the uniform extremism of the Arizona GOP statewide ticket is a boon to the general election prospects of Democrats in the state, including incumbent U.S. Senator Mark Kelly. But Republicans are counting on a midterm wave in both vote share and turnout that will award their candidates more or less equally, regardless of where they stand on the crazy-meter. As elsewhere, Democrats will try to fight back by accentuating issues like abortion rights that may flip swing voters while boosting their own party base’s turnout. But the coziness of the Arizona GOP’s candidates to the threat to democracy demonstrated on January 6, and their tendency to behave as full-spectrum extremists, may help Democrats just as much.

You might rightly wonder why the Arizona GOP has become a paradise for election deniers. It probably has a lot to do with the long, weird saga of the Maricopa County election audit ordered by a GOP faction in the state senate. This ultimately futile exercise in looking for nonexistent fraud forced Republicans in Arizona to take sides over 2020 election fantasies far more than those in other states. With Donald Trump himself focused on the audit, Arizona became a circus for demagoguery that ran 24/7, and that had an effect on the kind of people who vote in Republican primaries and the pols lusting for their support. It all just got out of hand.

Aside from the post-2020 dynamics, Arizona is also a state in which right-wing extremism has been known to flourish. Most obviously, it gave the American conservative movement its first great leader in U.S. Senator Barry Goldwater, who accepted the 1964 GOP presidential nomination with a speech infamously asserting that “extremism in the defense of liberty is no vice.”

Goldwater was a squish, though, compared to Arizona Republicans like Evan Mecham, a cranky perennial right-wing candidate who briefly stumbled into the governorship in the 1980s before being impeached and removed from office by the Republican-controlled legislature for obstruction of justice and misuse of government funds. A John Birch Society favorite, Mecham gained national notoriety for canceling Arizona’s Martin Luther King Jr. holiday. As the Los Angeles Times noted upon his death: “In addition to canceling the holiday, Mecham said working women caused divorce and that he saw nothing wrong with calling black children ‘pickaninnies.’”

And today’s statewide Republican candidates are certainly no more radical than Paul Gosar, who was renominated on August 2 for a seventh term in the U.S. House. His chronic association with white nationalists led my colleague Jonathan Chait to observe that Gosar “wants to extend the rightward boundary of the Republican Party coalition and bring it right up to the edge of open Nazism.” And his House Freedom Caucus ally congressman Andy Biggs is no piker either. Both big-time election deniers, Gosar and Biggs evoked memories of Mecham in opposing a federal Juneteenth holiday.

We’ll soon know if Arizona Republicans will pay a price in 2022 for linking arms and going off the deep end.