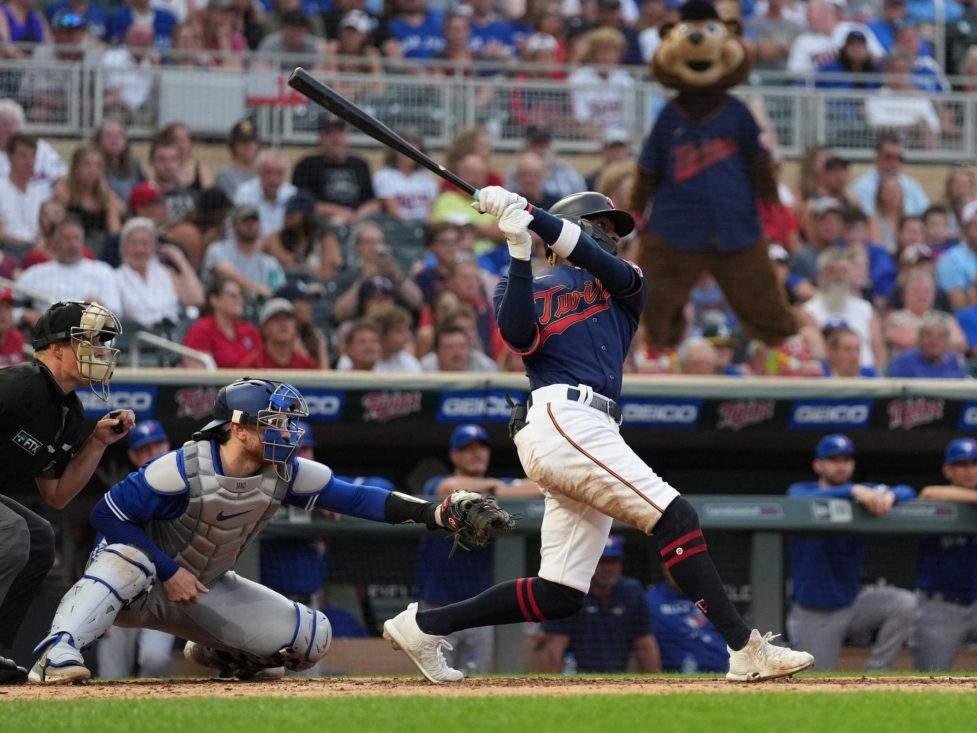 MINNEAPOLIS — When he made his first return to the Twin Cities as a Blue Jays starter last September, Jose Berrios treated his then new teammates to some of his favourite local restaurants.

He might be picking up another tab or two after his latest stop in the city where he carved out his reputation as an elite major league starter.

The right-hander’s uneven season took another notable dive on Friday night when he lasted just 3.2 innings, another underwhelming outing that put his team in a 5-0 hole that was too much for the explosive Toronto offence to overcome.

What followed was a wild night and near comeback, ultimately ending in one of the more demoralizing defeats of the season.

The visitors’ bats made a hell of a game of it, however, coming all the way back to tie it in the ninth before the Twins walked it off in the 10th for a 6-5 victory.

It was a gutting defeat given the calamitous ending, mostly due to self-induced Jays sloppiness.

After the Jays failed to score in their half of the 10th, closer Jordan Romano struck out Jake Cave but after catcher Danny Jansen dropped the ball and threw it high for the force out at first, the error put runners on the corners.

When the next batter, Tim Beckham, grounded a ball to Chapman, the bounced throw home was too much for catcher Jansen to handle and a head-first sliding Nick Gordon crossed for the winning run.

“There was a lot going on there,” manager John Schneider said. “Everything lined up the way we wanted it to line up – we just didn’t execute at the end.”

The Jays sure made it interesting from the ninth inning on. After tying it, they almost handed the win to the Twins as second-baseman Cavan Biggio booted a routine ground ball off the bat of Carlos Correa, putting runners on the corners with one out.

But after an intentional walk to load the bases, Yimi Garcia locked in to strike out Jose Miranda and induce a weak pop up to Nick Gordon.

The offence seemed poised to strike in the 10th when a walk from Vlad Guerrero Jr. and single from Lourdes Gurriel Jr. loaded the bases with one out.

But when Twins reliever Michael Fulmer struck out Teoscar Hernandez and Bo Bichette (looking) the table was set for what had to be a demoralizing loss for the Jays, given the wild ride of the evening.

“It was a roller coaster,” Schneider said. “I love the way we battled back.”

As underwhelming as the Berrios outing was, the near comeback was a thriller for the crowd of 29,593 at Target Field, including thousands from Northern Ontario, Manitoba and other parts of Western Canada.

The makings of a rally started with solo home runs from Matt Chapman in the fifth, Santiago Espinal in the sixth and a clutch two-run shot from Guerrero in the same inning to pull the Jays to within a run.

Ultimately, it wasn’t enough, as the AL Central-leading Twins and their powerful bullpen shut the Jays down and evened the four-game weekend series at a win apiece.

With Berrios at the forefront, what ended up being a great night of entertainment on a sultry summer night also shone a light on the Jays pitching challenges.

As he has been since his opening-day debacle at the Rogers Centre, Berrios remains an ongoing concern. His bloated 5.10 ERA is even worse than Yusei Kikuchi’s 4.86 mark, which is a stat no one would have predicted at the start of the season

While there have been signs of improvement lately, Berrios admitted Friday’s wasn’t his best effort.

“I wasn’t able to make quality pitches but I still went out there to compete and do my best,” Berrios said. “That’s why I got mad. We’re in this position right now, competing for our goal as a team … to not be able to go long in a game got me mad, but the team had my back and got us back in the game.”

At the ballpark where he had been a stalwart in the Twins rotation, Berrios started strong, retiring the first seven batters he faced.

But a solo homer to centre fielder Mark Contreras in the third seemingly jumped him off the rails in a hurry. When Berrios began the fourth by allowing a double, walk, single and then a monstrous homer to right field from the bat of Gordon, the Twins had inflicted enough damage.

Obviously, the Jays expected much more from Berrios, who was acquired at the 2021 trade deadline and awarded a seven-year, $131 million contract extension in December.

They’ve been patient with the personable 28-year-old, who has shown some signs of snapping out of his struggles. But the closer the team gets to meaningful late-season games, the more they’re going to need consistency from him.

“Just try to get that consistency,” Berrios said of his goals going forward. “Tonight I didn’t throw well, but I’m going to turn the page. I’ve been throwing the ball well lately.”

A great at-bat from Raimel Tapia drove in the tying run in the ninth, a two-out single to knot it at 5-5 … In the loss, the Jays were walked off for the sixth time in the season, falling to 3-6 in extra-inning contests … In 9.2 innings against his former team, Berrios has allowed eight earned runs (ERA, 7.45.) … With George Springer out yet again to rest his nagging sore elbow, newcomer Whit Merrifield was back in centre field and to further utilize his speed, the former Kansas City Royal batted leadoff. Merrifield responded with a pair of hits in four at bats, matching his output from the previous night … With some defensive changes late in the game, Merrifield moved to second base while Bradley Zimmer took over in centre … Brampton, Ont.’s Zach Pop made his Jays debut, coming on to pitch the sixth, allowing a pair of hits but no runs … A two-hit night from Guerrero extended his hitting streak to 16 games, the longest in his career … Guerrero punctuated his home run with a look of admiration and a gentle toss of the bat to punctuate his latest bomb.