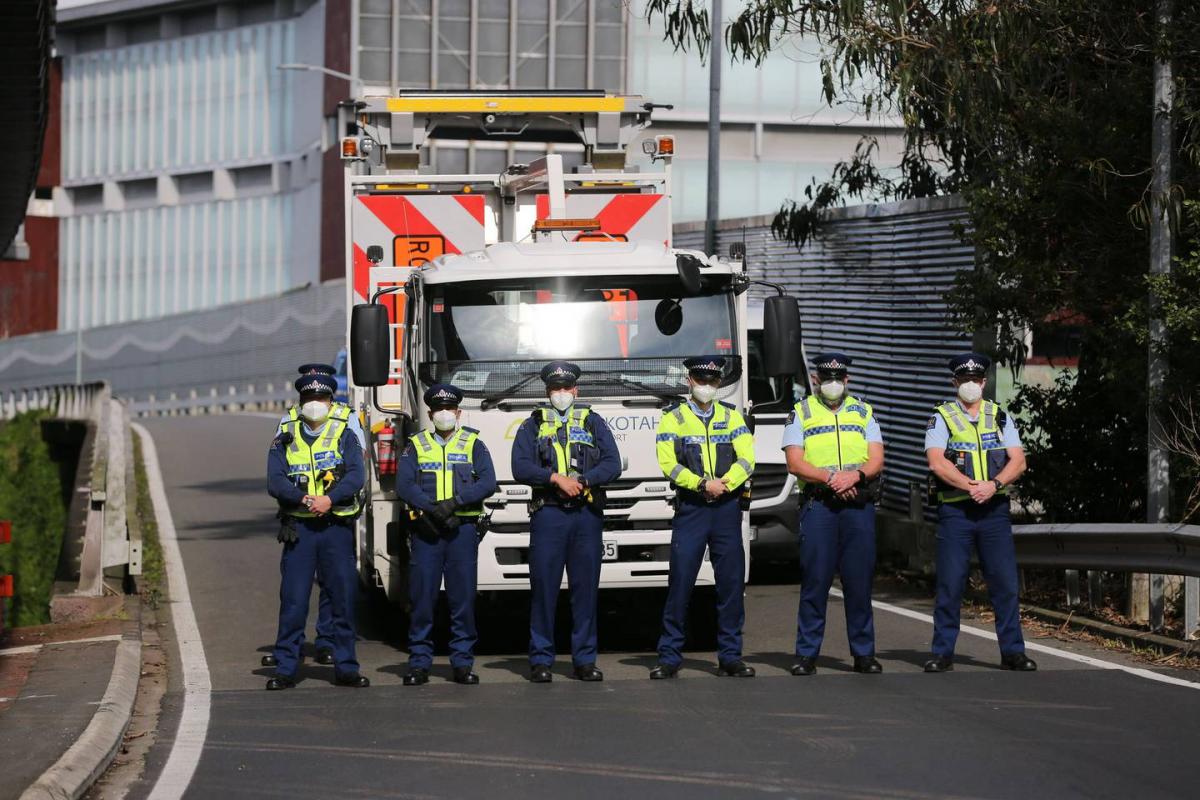 Brian Tamaki’s Freedom & Rights Coalition is set to make another march on Parliament – calling on New Zealanders to join various convoys there from both ends of the country.Tamaki made the announcement at today’s Auckland’s Domain protest, where police earlier had to step in between members of the Freedom & Rights Coalition and a counter-protest group as they traded verbal blows.

As of 2.30pm today, the protests had finished after a loop through the inner-city streets of Newmarket along Khyber Pass Rd. The protesters were unsuccessful at accessing the Southern Motorway as they had done on July 23.

“In general, this was a peaceful protest, which police monitored accordingly.”

Police had stood guard at closed Southern Motorway on and off-ramps at both Khyber Pass and Symonds St all morning in a bid to stop any moves to march on the motorway; closures which led to traffic delays.

Wilson said there were no arrests or incidents of note and police would complete a review in the coming weeks to determine if any follow-up action was required.

“The police focus today remained on balancing the safety of all protesters and the public, while acknowledging the right to protest peacefully and lawfully,” Wilson said.

The on and off-ramps that were closed to minimise further disruption had not reopened and there were no further network issues, Wilson said.

“We would like to thank the members of the public who deferred their travel through the affected areas today and acknowledge those that were inconvenienced.”

At least one person had been moved on by police after verbal insults were aimed at members of a group set up to protest the coalition’s latest anti-Government event.

Police had asked the counter-group to identify themselves to separate the crowd from Tamaki’s group. The road near the Auckland War Memorial Museum was being used as a barrier to divide the two groups.

After the tense stand-off, members of the coalition sang the national anthem, then after a series of speeches, prepared to march.

By just after 2pm, Tamaki was leading his protest up Symonds St towards Khyber Pass.

Police were initially unsuccessful in their attempts to block the protesters from carrying on towards the on-ramp, but the group eventually returned to the Domain.

The earlier speakers included Tamaki, who hit out at both the Government, labelling it “oppressive”, and the opposition, which he claimed was “shameful”.

The Destiny Church revealed another protest would take place at Parliament later this month. He called on people to join a convoy to the capital starting in the Far North early next week.

Once in Wellington, they would seek support from the opposition for a vote of no confidence in the Government.

The latest move to again protest at the home of New Zealand democracy comes after the earlier 24-day occupation of Parliament grounds. That occupation ended on March 2 in violence and a fire ripping through the protesters’ camp.

Tamaki said his group had no intention of blocking the motorway today like they had done two weeks ago. He also hit back at those who have labelled his supporters “raisins and fruitcakes”.

The protesters walked past Auckland City Hospital – stopping traffic – and then headed over Grafton Bridge.

As of 3pm, following the march through Newmarket, the protesters were returning to the Domain. The crowd was gradually dispersing.

Earlier, police and traffic officials closed two of the Southern Motorway’s busiest weekend sets of on and off-ramps near the central city as members of the coalition began their event, which they hope will be “impactive”.

Dubbed the ‘Kiwi Patriot Day and March’, the group faced a counter-protest group.

Two weeks ago, Tamaki and the coalition closed the Southern Motorway in both directions after walking onto it en masse after an earlier protest at the Auckland Domain.

NZTA initially closed the on and off-ramp at Khyber Pass – popular routes for people going to and from Newmarket – and urged motorists to consider a different route.

Police had also urged motorists to be prepared for traffic “disruption” around central Auckland today.

Police recognised the public’s right to “protest peacefully and lawfully” but said action would be taken when required.

Any concerning behaviour was to be reported to police by calling 105.

“We are about love and peace”

At 11am, the official starting time of the protest, members of the Freedoms & Rights Coalition vastly outnumbered those in the anti-protest group.

A member of the counter-protest, Samantha Thompson, travelled from the Bay of Plenty and told the Herald: “It’s more of a rally – we will not be moving from the location we are in. We are about love and peace.”

One lone person from the Freedom & Rights Coalition approached the counter-protesters, but was met with chants to leave.

The man called the counter-protest “tyranny” and claimed Tamaki’s group backed the thoughts of the “mass majority” of New Zealanders.

But a man dressed in bright-striped tights told the Herald he had joined the counter-protest after witnessing his now ex-wife be swept up by the so-called “freedom marchers”.

“We’re not together now after that,” said Mark, who had travelled from of the Bay of Plenty to be there.

“My poor wife got caught up in the rabbit hole and it started with Covid, so I’m here for a personal reason as well.”

Organiser of the counter-protest, Mark Graham, told the group who had gathered: “The best thing to do is ignore them.

“This started as a suggestion on Twitter three days ago, and now you are all here to say ‘no’ to people who spread hatred.

“If you don’t like what the current Government are about, then you vote them out in the next election. That’s democracy.”

But as he and others talked, members of the coalition came closer and started heckling the counter-group.

Members of the coalition also played loud music, aimed at drowning out the counter-group’s speakers.

The police presence increased as tension between the two groups rose.

A coalition flyer for the march says the event is to show New Zealand how many patriotic Kiwis want to “get NZ back again”; to “put the Government on notice that Kiwis have had enough”; and to “unite Freedom Fighters across [the] North Island”.

Organisers have stated this week they plan to make an “impactive” protest action.

According to the coalition’s website, similar events are being planned in Christchurch and Wellington later this month, while a convoy from Kaitaia to Wellington, called The Great Kiwi Roadtrip, has been planned for August 22.

In response, a counter-protest group has been organised and is set to shadow Tamaki and the coalition.

“The coalition and Brian Tamaki are not calling for freedom and rights – they want things to be done the way they want. That’s just selfish,” Graham said.

“He is throwing a tantrum because he is not getting what he wants. This is not democratic.”

Some who supported the counter-protest have said they would block motorway entrances to prevent any attempt by demonstrators to disrupt traffic.

In response, police said they would be closely monitoring the protest.

Two weeks ago, police were criticised for not stopping Tamaki and his supporters from gaining access and then closing the motorway in both directions.

Police are still considering charges against some involved in that march.

“Police recognise the lawful right to protest. We also recognise the rights of the public to go about their lawful business,” a police spokesperson said.

“We will monitor and respond to the situation accordingly to ensure public safety and to make sure any disruption to the public is kept to a minimum.”

Police said earlier in the week that they had been in talks with organisers of today’s protest in and around Auckland Domain.

The group said it would not be the same as the previous protest but would be “impactive”.

The coalition had organised and supported many protests across the country in the past 18 months, including the 23-day occupation of Parliament grounds earlier this year.

Retailers were also nervous ahead of today’s protest.

Some previous protests have led to closures of roads in the Newmarket shopping precinct.

“The last one [two weeks ago] caused major disruptions to our trade. We saw an immediate impact as Newmarket was cut off from the public so shoppers could not come in.

“Saturday’s our busiest day and in these times we need all the business we can get.”

Prior to that, he had been charged three times over his attendance at Auckland Domain lockdown protests.

After last month’s motorway chaos caused by Tamaki’s group, Auckland Central Area Commander Graeme Anderson said offices would review the actions of those involved with a view to prosecution for being on the motorway.

In addition to the offence of pedestrians on the motorway, police noted poor driving decisions by motorists including motorcyclists without helmets, children riding in the back of a ute, and at least one pedestrian who put themselves at significant risk by moving into a live traffic lane.

“While the organisers put out a press release the night before, they refused to engage with Auckland Police prior to the protest to provide detail about their intended route and did not divulge this information until the protest began,” Anderson said.

“This was extremely disappointing, as it meant our staff and Waka Kotahi had to move quickly to keep all road users in the area safe.

“This was reckless behaviour on part of the organisers and participants. I don’t know why they would think this was a safe act to undertake, and it had the added consequence of causing disruption to members of the community who were just trying to go about their day.”