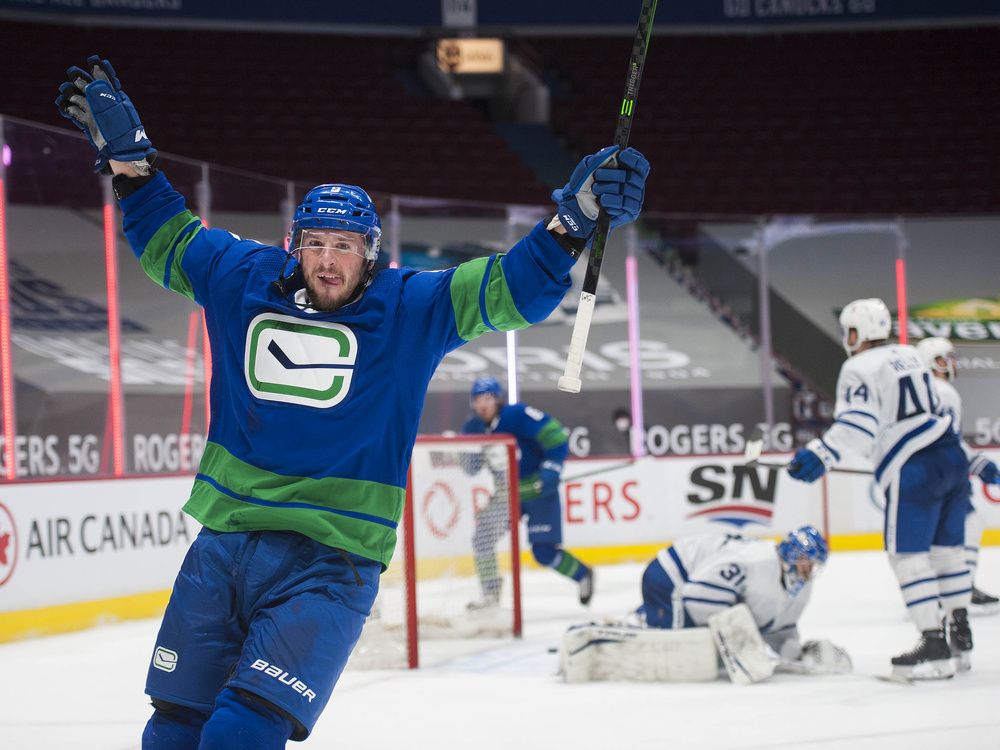 We’re looking back at the 2021-22 Vancouver Canucks with a focus on J.T. Miller. Over the past few weeks and in the weeks to come, we’re breaking down the season and taking a look at how player situations stack up going into 2022-23 …

Contract status: One year remaining on a deal that carries a US $5.25-million cap hit. He’ll be eligible for unrestricted free agency next summer.

How 2021-22 went: Where to start? How about the point total: Miller’s 99 points was the seventh best single-season total in team history, behind seasons posted by the Sedin twins, Pavel Bure, Alex Mogilny and Markus Naslund.

That’s astounding company. For many nights this season, Miller was the straw that stirred the drink.

“When he plays to his capabilities, this team usually wins,” head coach Bruce Boudreau said after the season finale in April. He regularly raved about Miller’s energy and competitive spirit.

The Canucks also finally started to build a new identity as the season wore on and they finally found themselves in a pattern of success. Before Boudreau was hired, the team seemed to have lost the sense of direction they’d had just two seasons before, playing listless hockey that had them toiling in the mediocre depths of Canucks history.

Miller is a vocal leader, but acknowledged at one point he was working hard to make his comments pointed and precise, that too much volume would have a dulling effect.

It was a big season for the American. He thrived on the ice and grew as a leader in the room as well.

“I’m really proud of our guys. It’s really easy to roll over when you’re 8-15-2 and write the season off. We’ve done everything we can to prove we can play with the best and it’s really exciting no matter what happens,” he said in the season’s final week, with the Canucks’ playoff dreams vanishing.

How the future looks: Will Miller be a Canuck at the end of the summer, let alone in a year’s time? Some prognosticators see hMiller being able to land a long-term deal with a US $10 million annual salary. Others have said he’s likely to come in at a number closer to the Rangers’ Mika Zibanejad, who is the same age and is about to play the first season of an eight-year, US $68-million contract he signed last fall.

Even the Zibanejad figure, which will average US $8.5 million per season, will likely be too rich for the Canucks.

For Miller, though, wherever he’s playing next season he has set a big standard for himself. His previous career high in points was 72, which he tallied in his first season in Vancouver playing alongside Elias Pettersson and Brock Boeser.

Before that season, he had been a solid depth winger for the New York Rangers and Tampa Bay Lightning. In Vancouver he’s been handed a higher-profile role and has thrived.

But the 99-point tally is outsized compared to even his strong first season in Vancouver. If he can repeat that performance in 2022-23, he’ll indeed land a big contract.

Of course, if he doesn’t it won’t quite be as big a payday.

Whichever team Miller suits up for in 2022-23, even if he isn’t immediately signed to an extension, that club will surely be betting on him continuing to have the kind of success he showed in 2021-22.

Greatest strengths: Vision and playmaking, plus a powerful competitiveness and desire to win.

Greatest weakness: He’s not the greatest backchecker, with more than one instance where this was glaringly obvious.

Is he trade bait?: Yes, right now. Andrei Kuzmenko’s pending signing reshapes the Canucks’ depth on the wings. Kuzmenko isn’t the same player as Miller, but he could replace at least some of Miller’s down-low playmaking strengths.

The big question: Does Miller like the chance to win and be the big dog enough in Vancouver to lower his salary expectations to a level that will match the Canucks’ budget?

Read more from our Canucks Under the Microscope series

Sign up to receive daily headline news from The Province, a division of Postmedia Network Inc.

The next issue of The Province Headline News will soon be in your inbox.