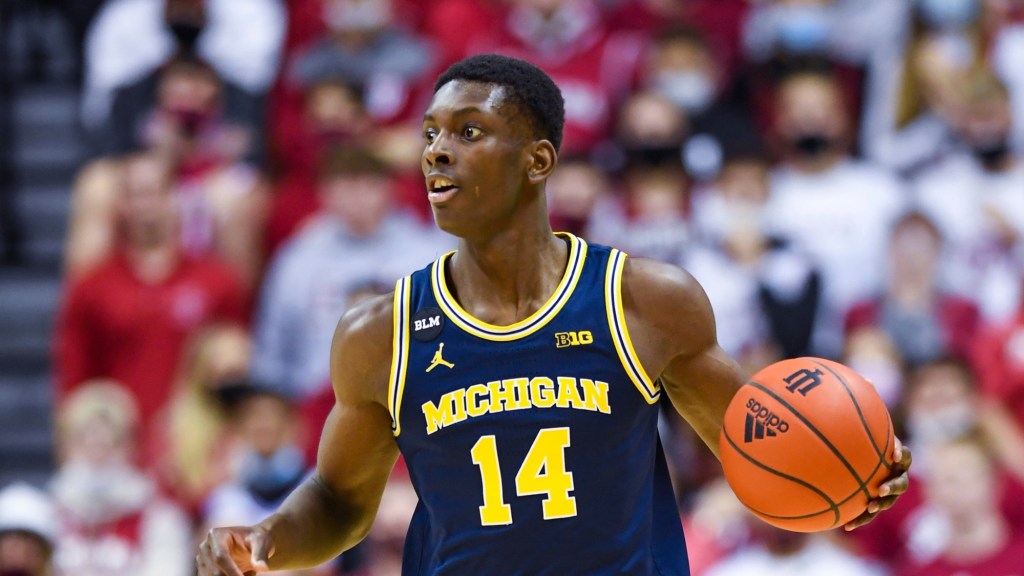 PLAYA VISTA — The Clippers were quiet until the 43rd pick, when they called Moussa Diabate’s name midway through the second round of the NBA Draft on Thursday, selecting the French forward from Michigan whose “unbelievable motor” and “unbelievable energy” Lawrence Frank raved about shortly after the 58th and final pick was announced.

And that was it. The Clippers’ snapped their seven-year streak of draft night trades, selecting Diabate – at 6-foot-10, 210 pounds with a 7-3 wingspan – and making no other moves.

“You’re almost happy when you don’t,” said Frank, the Clippers’ president of basketball operations, when he crossed the street to answer reporters’ questions at the Hilton Los Angeles Culver City.

A Big-10 All-Freshman selection, Diabate is long, athletic and raw who Frank said the Clippers consider “a development player.” As a freshman in college, he averaged 9 points and 6 rebounds and shot 54.2% from the field in 24.8 minutes a game. He hit just 61.9% of free throws and was sometimes prone to foul trouble.

The Clippers’ expectations align with Diabate’s, who told reporters before the combine that he hoped to find a team that would give him room to develop a long-term foundation.

“It’s a situation where I feel like I’ll be able to rise and get better,” Diabate, 20, told the Detroit News in May. “I don’t want to just go in there and just end up staying in the league for three years and just get out. I’m trying to get something where the structure is going to be solid and it’s going to help me grow as a man and as a basketball player.

“I’d say coming into a team, I feel my role I feel is going to be as an energizer,” added Diabate, who became the third Michigan player to be drafted in the second round over the past 10 years, along with Isaiah Livers, Ignas Brazdeikis and Glenn Robinson.

What won over his new employers, Frank said, was his willingness to criss-cross the country to work out for the Clippers after ankle pain forced him to bow out of his first planned workout with the team – and the enthusiasm he displayed when he returned for Take 2.

“He’s like, ‘My ankle’s kind of hurting a little bit, but I want to go through,’ …. we said, ‘You’re not gonna work out, it doesn’t make sense, this is your 19th workout,’” Frank said. “And after we spent time with him that day, I said, ‘Hey look, we got a couple guys coming in next week … talk to your agent and see if you want to come back and compete?’

“He goes, ‘Well, I love to compete, so flew back to Miami where his agent’s based, went to work out for two teams, flies all the way back here for his 21st workout and his motor was everything it’s always been. To me, when we talk bout the qualities we value, it all starts with your actions. It was just so impressive to see, on your 21st workout, to be able to bring the same energy and the same intensity that you had in your prior workouts.”

So, with that in mind, the Clippers’ brass hunkered down at Honey Training Center for Thursday’s NBA Draft with just one pick because their play-in loss to New Orleans not only ended their season, it sent their lottery pick to Oklahoma City – a provision of the 2019 blockbuster trade by which they acquired All-Star Paul George, which, helped entice fellow All-Star Kawhi Leonard to sign on.

Through their evaluation process leading up to the draft, the Clippers remained mum on the players who they were looking at, though word leaked about some of them – including Diabate, who said he’d met with about 10 teams, including the Clippers.

A glimpse of what ~The Moose~ can offer the @laclippers 🦌

Next up: Free agency, which begins officially at 3 p.m. on June 30, when the Clippers will have – with the addition of Diabate – a roster of 12 players, including Leonard and George, who should be healthy after missing all or much of last season with injuries.

Isaiah Hartenstein, the Clippers’ free agent backup center, also was drafted No. 43 overall – by Houston in 2017.

Veteran wing Nicolas Batum is expected to decline his $3.3 million player option, but he’s given every indication that he wants to return to the team. The Clippers have Batum’s early Bird rights because he has two years of service with them, meaning he’ll be able to get a raise by signing a new deal for as much as $10.9 million for at least two years and without an option in the second year.

The Clippers also will decide whether to exercise their $7.5 million team option for center Ivica Zubac. They have until June 29 to make that call if they don’t want to let their “Iron Man” become an unrestricted free agent. He’s also eligible for a four-year, $61 million extension.

June 29 is also the deadline for the Clippers to tender offers to two-way guard Jay Scrubb (who missed more than 90 games the past two seasons because of foot injuries) and Amir Coffey, who started 29 games last season and is a restricted free agent. They have Coffey’s Bird rights so they won’t have to dip into their tax mid-level exception on a long-term deal.

The Clippers moved quickly to retain Robert Covington following the end of their season; on May 5, news broke that he and the team came to terms on a two-year, $24 million contract extension.

And then there’s the specter of Kyrie Irving.

The mercurial Brooklyn guard has the basketball world speculating about his future with the Nets: Irving has a $36.5 million player option for the 2022-23 season, but reports indicated that he and the team are at an impasse in contract talks and, moreover, that he has a list of teams he would consider in a sign-and-trade.

And if Irving departs, will another seismic domino fall too? There’s also speculation that Kevin Durant, the 12-time All-Star and league’s 2013-14 MVP, is “monitoring” the situation and “considering options with his future,” per The Athletic’s Shams Charania. Could the Clippers factor into those talks? ’Tis the season to at least entertain the possibility.