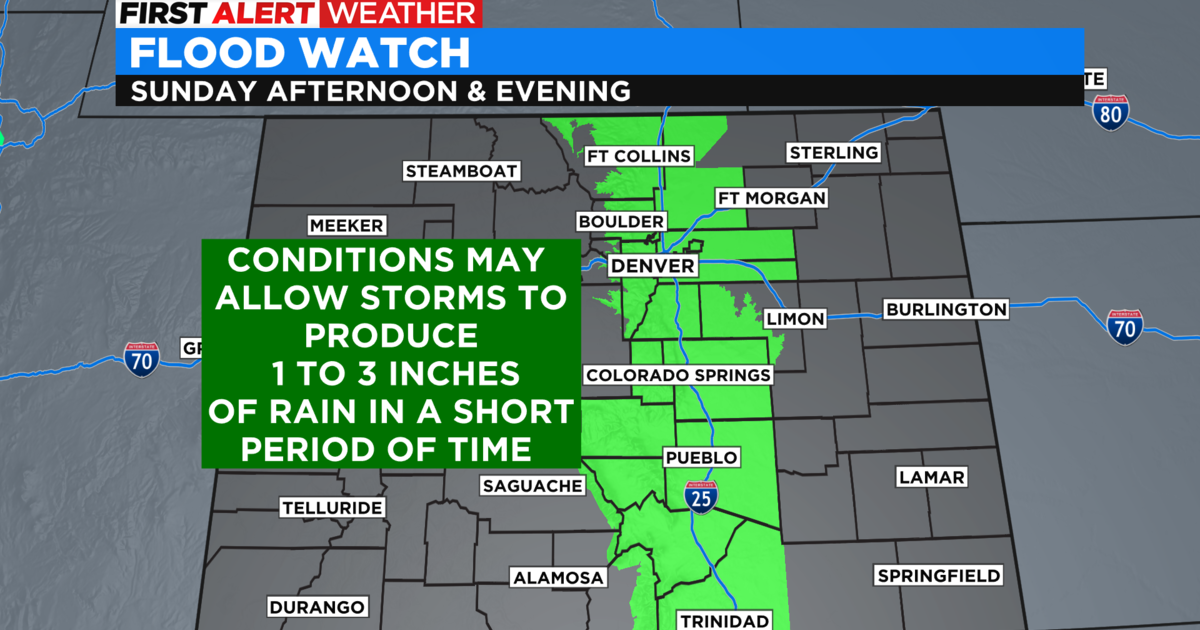 Thunderstorms formed along Colorado’s Front Range on Saturday afternoon and some were relatively strong with heavy rain, small hail and a lot of cloud-to-ground lightning. The rain fell hard enough to cause standing water on some streets in east Denver and a potential microburst knocked trees down between Commerce City and Brighton.

Storms will linger on the eastern plains into the evening hours before coming to an end. Partly to mostly cloudy skies are expected overnight. But the weather scenario will be a little bit different on Sunday and it has created enough concern that the National Weather Service has placed all of Interstate 25, from Wyoming to New Mexico, under a Flood Watch for Sunday afternoon and evening. The watch includes all of metro Denver, as well as the Cameron Peak and Calwood burn scars.

The current forecast for Sunday is looking a bit warmer than originally anticipated along Colorado’s Front Range. Instead of upper 70s and lower 80s it now looks like we could see highs a few degrees warmer. That may not sound like a big deal but in this particular set up that may be enough to change the dynamics of the atmosphere to the point where we could see storms develop with locally heavy rain.

If the worst case scenario plays out we could see storms that drop as much as 1 to 3 inches of rain in a relatively short period of time. The threat will start in the early afternoon and last into the evening. In fact the risk could actually grow in the evening hours.

The threat has prompted us here at CBS News Colorado to issue a First Alert Weather Day on Sunday to build awareness. Stay tuned and we will keep you posted with the latest weather updates.

Watch First Alert Meteorologist Chris Spears’s weather forecasts on CBS News Colorado — on TV and on our free streaming service. Read his latest reports or check out his bio and send him an email.