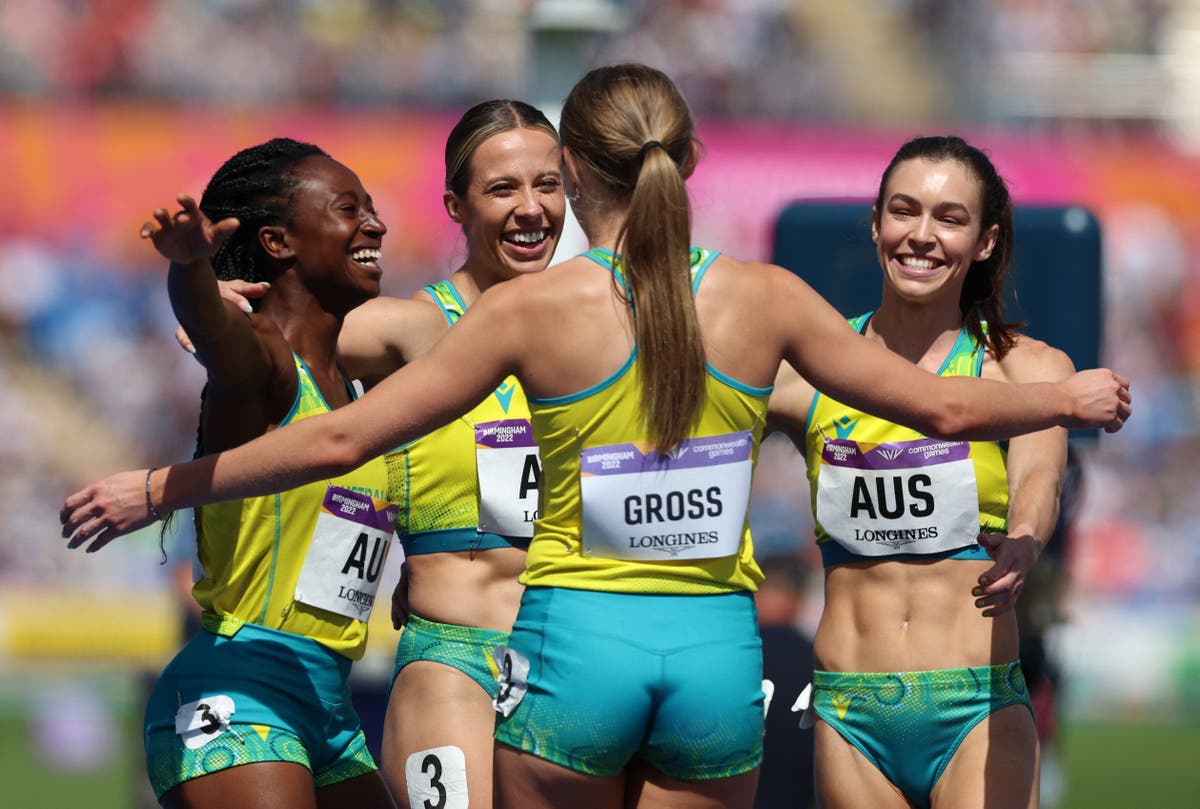 Follow live coverage as the 2022 Commonwealth Games continues in Birmingham with 33 gold medals to be won.

England and Australia meet in a mouthwatering netball semi-final after the hosts thumped world champions New Zealand by 10 points to earn their place in the last four. Australia limped through to the knockout stages after a shock defeat to Jamaica, but England are all too aware that the Australians – still smarting from their last-gasp loss on the Gold Coast four years ago – will be licking their wounds.

England’s cricketers made an emphatic statement by trouncing New Zealand on Friday, chasing down a paltry 72 with 50 balls to spare in a seven-wicket win to finish atop their group. They have now won six successive T20s and confidence is steadily building but Harmanpreet Kaur’s India are likely to present a step up in opposition.

There are also medals to be won in athletics, lawn bowls and wrestling today. Follow all the action throughout the day:

England and Scotland safely through in 4x100m relay

Back to the athletics where the women have just got through the 4x100m relay heats.

There was no baton drama for England who qualified comfortably for the finals.

Scotland join them too having followed home gold medal favourites Jamaica in the other semi.

India will have taken that when they won the toss and opted to bat first.

Smriti Mandhana (61) was well backed up by captain Harmanpreet Kaur (20) as India roared out of the traps.

A couple of middle-over wickets for Freya Kemp helped check the momentum before Jemimah Rodrigues (44*) and Deepti Sharma (22) stepped on the gas pedal once again as India post what looks to be a challenging total for England to chase.

England will need 165 to reach the final against either Australia or New Zealand.

India on for good total against England

Back to the cricket where skipper Harmanpreet Kaur has backed up Smriti Mandhana’s explosive start with an important contribution in the middle of the innings.

Mandhana eventually went for a powerful 61 before Kaur added 20 as England fought back.

Freya Kemp has taken two wickets to slow the Indian progress but they still look on for a competitive total with Jemimah Rodrigues and Deepti Sharma well set at the crease.

Lamara Distin has taken the gold medal in the women’s high jump.

The Jamaican was the only athlete in the field to clear 1.95m and emerges as champion as a result.

Pre-competition favourite Eleanor Patterson of Australia had to settle for silver with Distin’s Jamaican teammate Kimberley Williamson taking the bronze.

It was disappointment for Morgan Lake of England, who comes up just short of the medals in fourth.

The 17-year-old delivered a first senior international victory on Thursday evening at Sandwell Aquatics Centre, finishing ahead of England’s team-mate Lois Toulson to top the leaderboard by a huge 20.20 points.

The women’s 10m sychro platform final kicks off a little later on this evening.

Over in the diving, Jack Laugher’s bid for three golds at these Games is still on but only just.

The double gold medallist was nervous for the prelims of the 3m springboard but scraped through into the finals in 11th place.

Scotland’s Jake Wightman admits his confidence is sky high as he chases a golden treble.

The 28-year-old, who won shock 1500m gold at the World Championships in Eugene last month, strolled through his Commonwealth Games heat on Thursday.

It is the next step on his quest to add the 1500m Commonwealth title and 800m crown at next month’s European Championships to his world gold.

It was also the first time he has been announced – by stadium commentator, dad and coach Geoff – as the world champion since July’s victory in Oregon.

He said: “It was special, it was a confidence boost if you get announced as that. That’s the most it’s sunk in because that is what I was waiting for, to be announced as world champion, and be like ‘yeah I’ve actually done that’.

“It was nice walking around before with a lot of people coming up to me and saying ‘well done’. I still got less of a cheer than Matt Stonier from England but I guess there are more English fans than Scottish fans.”

Regarding the race, he said: “I felt I should dictate it at some point and I was surprised we went so slow as a second heat as there are guys who should go through as fastest losers who won’t.

“It’s hard to sometimes get motivated as there is a lot more to lose than gain so it’s good to go out there, feel good and qualify comfortably.”

India off to a flyer against England

India are off to a flyer in the cricket where opener Smriti Mandhana has been flaying England to all parts of Edgbaston.

She’s just moved to 50 not out off just 23 balls – a fastest-ever half-century for India.

England need a wicket and fast.

India 64-0 off just six overs and looking on for a big, big total.

Jamaica’s amazing run at this netball tournament has continued after they defeated New Zealand to reach the final.

The Sunshine Girls came out on top 67-51 to seal their shot at gold.

England take on Australia in the second semi-final this afternoon in a repeat of the 2018 final.

Adam Gemili looking for happiness after crashing out

Weary Adam Gemili admits he must find happiness again after crashing out of the 200m at the Commonwealth Games.

The sprinter failed to make Saturday’s final after only running 20.97 seconds to come fourth in his semi-final on Friday.

It is the latest disappointment for Gemili, having been knocked out of the heats at the World Championships in Eugene last month.

Then, he initially blamed the media spotlight on his controversial ex-coach Rana Reider, who is being investigated by the US Centre for SafeSport after multiple allegations of sexual misconduct, for impacting his form and mindset.

The 28-year-old, who has been based in Florida, split from Reider just days before the Games in Birmingham and knows he needs a change.

“I know there have been issues with me this year, it has affected me,” said Gemili, who still may run in Saturday’s 4x100m relay heats. “Physically I’m OK but there has been a lot which has affected my training and the mental side for me.

“That’s something which has been new this season and I’ve really struggled to get that right. I didn’t know how much of a difference it does really make. It’s for me to come home and find some happiness again.

“It’s a tough question (how to find happiness), start by spending a lot more time at home. I’ve been away from home since I was 19 years old.

“I am 28 now and I haven’t spent a lot of time with people around me. Maybe one or two months a year.

“I need to start with surrounding myself with people I love and who love me. Hopefully that happiness does come and you see the old Adam bounding down the track next season. Fingers crossed.”