Ian Flaws was introduced to breakdancing while he was on a date in 1997. While the relationship with his date didn’t last, the evening changed his life.

The Bboy Factory owner and head teacher has dedicated the past decade to providing a world-class breakdance education for his students, emphasizing its cultural and international importance. Denver’s first “breakin’” studio celebrates ten years on Saturday, June 25, with the Bboy Factory Anniversary Ball, where live art, music, breakdance battles and performances will last until 11 p.m.

Growing up in Boulder during the ’90s, Flaws scribbled graffiti in his notebooks, listened to hip-hop music and was drawn to various countercultures — punk, skating, middle-class rebellion. Early on, as a breaker, he didn’t care about competing. “I just thought it was cool,” he recalls. “[It was] a way to express myself.”

Years later, Flaws took his teaching certificate to Korea and Cambodia and started training seriously under world-class breakers while he earned money teaching. “Korea’s breakin’ scene was the best in the world. They went from unknown to dominating in just a couple years, elevating the level of dance with extremely dynamic power,” Flaws says.

He says Colorado had an isolated breakin’ community, and after returning home, he wanted to create the bridge between that global scene and the local scene. “That was the lightbulb for the Bboy Factory,” Flaws says.

The studio is tucked in an industrial building between an auto glass shop and an HVAC company in north Denver. Unassuming from the parking lot, once you step inside and you’re struck by the drone of fans, which are immediately overpowered by a large speaker booming remixed funk music and breakbeats. One wall is covered with mirrors, the opposite wall is covered with a 30-foot-wide, floor-to-ceiling graffiti piece, complete with original hip-hop imagery — vivid scenes of breakers, an alien spacecraft spinning records on turntables, and a can of spray paint wearing a Kangol hat. Bboys and Bgirls of all ages might be stretching to prepare for a class, and it wouldn’t be out of the ordinary to see an eight-year-old spinning on top of their head.

Written on the wall just past the main dance floor is the Bboy Factory Code of Conduct, with the first code saying, “Respect the Culture.” To Flaws, this means presenting all the elements of hip-hop culture together: breakin’, graffiti, deejaying and emceeing. These pillars originated in the Bronx, New York, in the early ’70s during a time of widespread gang violence and systemic oppression. A specific culture established itself with its own style, dialect and worldview far removed from Flaws’s middle-class Boulder, Colorado, upbringing.

He is candid about his past and understands it could rub some industry folks the wrong way. “I acknowledge my place as a guest within the culture,” he says. “I’ve taken every step to provide, promote and preserve this culture through the shared love of the art form. I just remind myself of my intentions, and I’m confident that I’m doing things in a way that is honorable and respectful.”

Flaws knows that his studio wouldn’t be where it is today without the support of the generations of breakers that came before him, and staying connected to elders in the community is very important to him. “I’ve always felt the Colorado scene was a big fish in a small pond, but I feel validated by the whales out beyond the pond. These men and women have taught at the studio; they come to our events and put their name and reputation behind what I’m doing. Those endorsements carry a lot of weight,” Flaws says.

“Trying to keep up with the authenticity is difficult,” says Raphael Xavier, a visitor to the Bboy Factory and Princeton University professor of hip-hop studies who started breakin’ in 1983. “I think the Bboy Factory continues to give opportunities for people to practice the form, giving access to the culture and dance in ways they might not otherwise have. Giving access to different communities is important.” 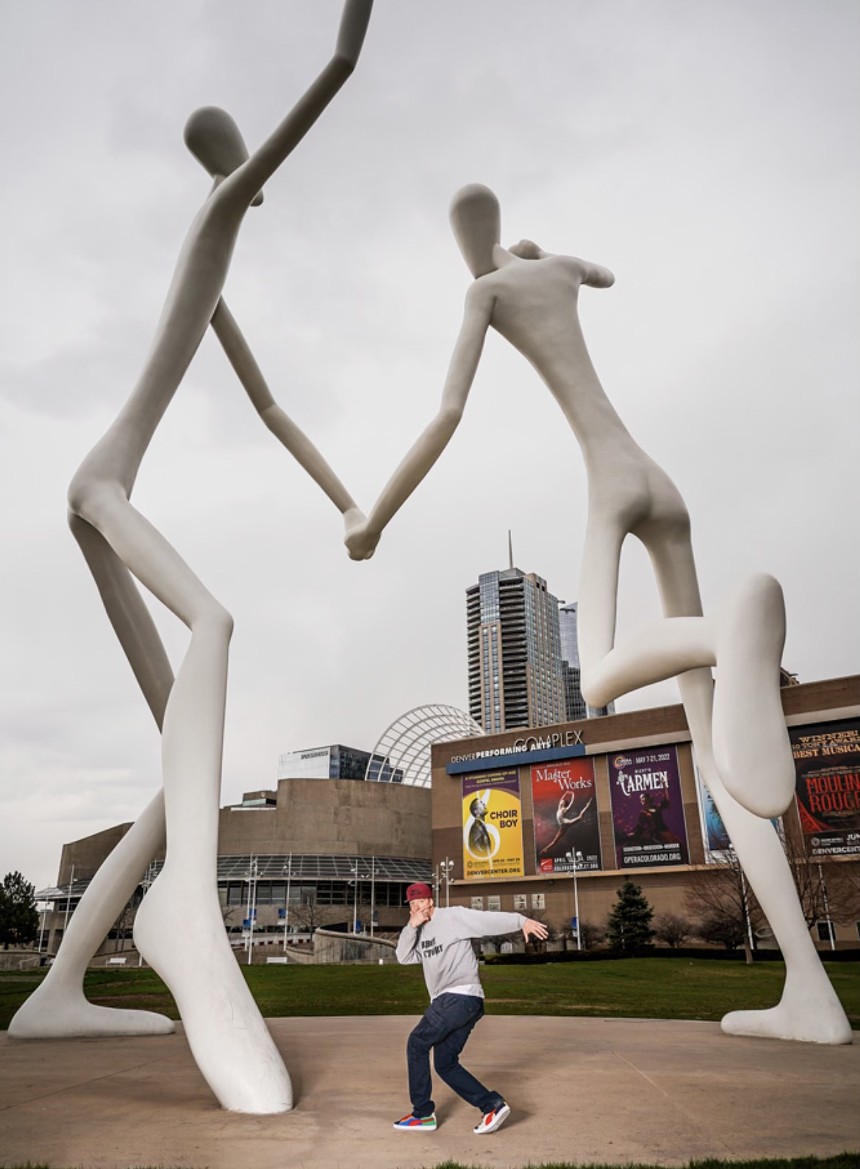 Ian Flaws wanted to bring the global breakdance community to Colorado through Bboy.

Denver native and iconic Bgirl AsiaOne says that spaces such as the Bboy Factory give people the opportunity to connect and share the tradition, knowledge and history of the art form. “I taught a class [at The Bboy Factory] for Bgirls called Bgirlism. It was amazing, because I had a chance to work with women of different ages and take them on a hip-hop journey that catered to them in thought, personality, style, flavor and overall experience,” she says.

Flaws trains elite Bboys and Bgirls, pulling from his teaching background to organize his content into a thoughtful class structure with warmups, explanations of the movements, and giving space to play with the movement. His classes blend instruction with philosophy and life lessons. “If there’s five different breakers in my class, there should be five different stories to tell,” he says.

Although the dance established itself to settle disputes without resorting to violence, Flaws conveys that breakin’ doesn’t have to be competitive all the time. “I’ll tell students: For every hour of competition, there’s hundreds of hours in the studio. If you don’t enjoy those hundreds of hours, the hour of competing won’t be worth it.” There’s a moment of pride when he gets a student to accept the sometimes tedious nature of improving. “Discipline, hard work, dedication, putting in the hours,” says Flaws. “There are no shortcuts.”

He passes down the lessons he learned the hard way as a student. “For my first ten years, I didn’t learn step by step. I wasn’t thinking about a process that would create consistency, so I was injured a lot,” he explains. Flaws makes sure to avoid that with his students, especially with the six- to ten-year-olds who make up a core demographic of his studio. “I would rather convey to students how hard breakin’ is and lose a few along the way than have students be five years in and have to go back and relearn stuff, the way I did,” he says.

As hip-hop culture spread globally, breakin’ followed, and has now become an Olympic sport that will debut in Paris in 2024. “Growth is inevitable, but I feel very conflicted about the Olympics,” says Flaws. “I’ve always taught breakin’ as an art, not a sport.” Flaws says there’s no question that breakin’ as an Olympic sport will see involvement from deep-pocketed organizations with sponsorship money, and corporate interests won’t have the same concerns about maintaining the culture that he has. For example, he sees a likely misrepresentation that will dilute the relationship between DJ and dancer: “How will the Olympics create a platform to highlight the DJ?” 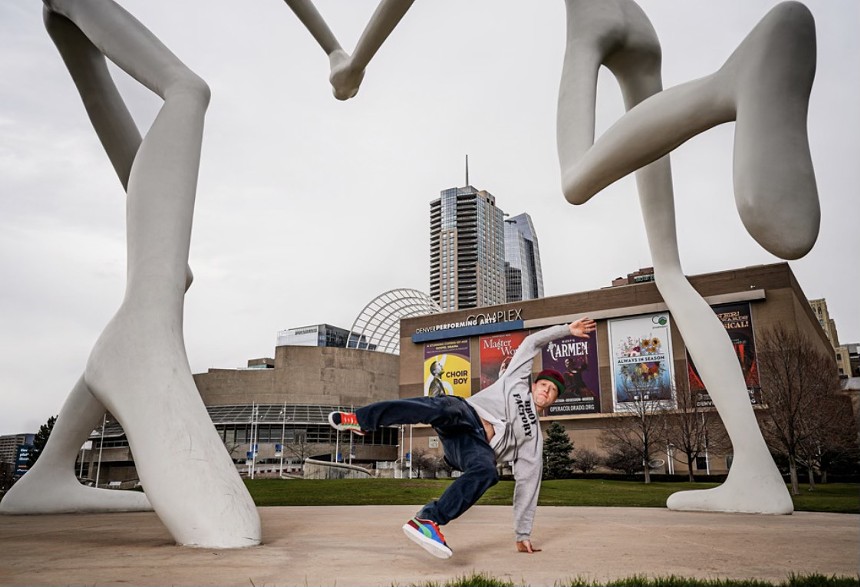 Ian Flaws trains young breakers alongside other veterans of the dance.

Looking back on a decade of building the Bboy Factory into a reputable Denver institution, Flaws is candid about his shortcomings. “This is my passion, my business and my hobby, so it’s hard to not bring that home every day.” It’s not just his students that are growing up. “In the last ten years, I bought my first house, got married, had a kid, and sometimes stubbornly kept the place going. It’s taken ten years to become profitable, and now I believe we can call ourselves one of the premier breakin’ schools in the nation.”

As he gets ready for the Anniversary Ball, Flaws reminds himself why he pours everything he has into this culture and community. “The goal is to go back and think about why I got involved in the first place; wanting to create an event that I would want to attend.” On June 25, you’ll find him on the dance floor in a full Adidas tracksuit, suede shoes and a Kangol hat — because the more hip-hop grows and changes, the more it stays the same.