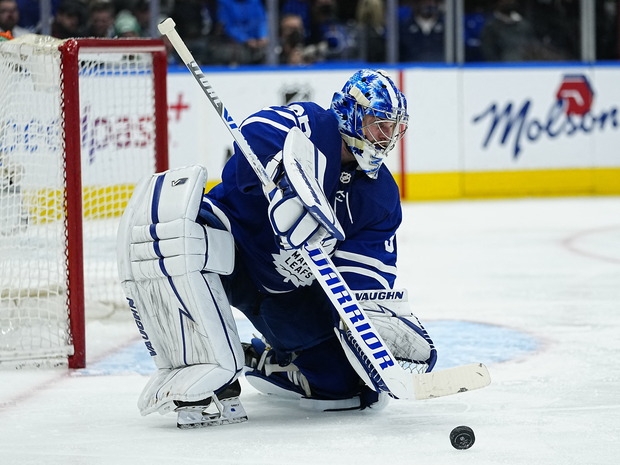 Kyle Dubas tried to put his best spin on the Maple Leafs’ fortunes — a week before he could lose his starting goaltender, a top scorer, a physical defenceman and risk a contract spat with a young blueliner, all while in a salary cap bind to keep his team in the Eastern Conference playoff race.

In the general manager’s first comments since the Leafs were eliminated again in the first round of playoffs in May, foremost among matters he can influence is satisfying Jack Campbell’s wishes for money and term to keep one of the most successful Toronto goalies in recent years from leaving as a free agent on July 13.

“Obviously, it’s getting very close to decision time for everybody,” Dubas said Wednesday in Montreal of talks with Campbell and agent Kurt Overhardt. “Especially for Jack. It (his first shot at a big UFA pay day) is a life-altering event.

“It’s no secret that goaltending is a priority for us. We’ll continue to speak with he and his people this week and be well prepared going into next week.”

Campbell was a bargain the past two years for Toronto at $1.6 million US but could double or even triple that now. Working against ‘Soupy’ is that he turned 30 earlier this year, which may make the Leafs leery about committing to anything beyond a few years.

There are other goalies who might come to market, of course, Colorado Stanley Cup-winner Darcy Kuemper and St. Louis’ Ville Husso among them, though Kuemper is 32.  No one can fault Campbell for taking a better offer elsewhere, but the Leafs have a terrible record of hanging on to accomplished netminders and made it harder on themselves with so much money wrapped up in their ‘core four’ forwards, Auston Matthews, Mitch Marner, John Tavares and William Nylander. That’s on top of investing $7.6 million for another two years in back-up Petr Mrazek, who couldn’t stay healthy last season and, despite 12 wins, had some rough patches. There is the option to move him and put the money towards Campbell, especially  if they can find a rival team in need of reaching the cap floor, but Dubas remains in Mrazek’s corner.

“I’ve been very happy with where Petr has been in the off-season. He’s been very responsive and communicative with our staff. When I look at Petr, obviously, he’s the first to step up in front of everyone here and accept when he hasn’t played to the level he feels he’s capable of. (But) if I’m forecasting, do I bet that he was the goalie in those 20 games or bet he was the goalie for the 270 before with a (.911) save percentage who gave his team a chance to win? I probably bet on the larger sample.”

On the broader topic of trades, there’s no denying Dubas is working on everything from a minor deal to what could be fetched for Nylander, the least expensive of the four and the one most people figure would be the sacrificial lamb after the playoff losses to get players or prospects back. But Dubas cautioned against the certainty of any deal the next week just because he’s in close quarters with 31 other GMs ahead of the draft Thursday and Friday.

“In your mind you want to imagine that everyone is going to sit in there together and strike deals. But I think there’s a lot of communication that goes on well before (now). You have your plan, everyone knows what you’re trying to achieve. A large majority of teams are very close to the cap, there’s always jockeying and space is very scarce around the league.

“If we need to create cap space to improve our team, I think we know we would be able to move a lot of our players for good value.”

Dubas all but shut the door on winger Ilya Mikheyev, whose departure became imminent when word leaked the Leafs were shopping his negotiating rights to recoup at least a late-round draft pick before next Wednesday. Dubas consoled himself and Mikheyev’s admirers that if a deal doesn’t miraculously happen in the next few days, it was still three good years in Toronto for a relatively unknown player who overcame a career-threatening wrist injury to score 21 last year.

The other pressing free agent concern, defenceman Ilya Lyubushkin, remains unresolved, but the Russian did enjoy his half-season here and may come back to the Leafs even if he hits the open market.

“We’ve had lots of discussions, we liked what we saw,” Dubas said. “It’s just a matter of what we can afford based on the minutes that he’s capable of giving us. It’s also for him and his family (to decide).”

The Leafs’ modest success in converting two first round picks into home-grown offensive defencemen has become complicated in that Timothy Liljegren headed off restricted free agency with a $2.8 million bridge deal new while Rasmus Sandin has not. Sandin was considered the more developed of the pair until a late-season injury elevated Liljegren to full-time status.

“They’re both massive parts of our future, significantly younger than other full-time members of our defence.” Dubas said. “We need them to continue to take steps. In Rasmus’ case, we’re trying to set him up to be healthy all through the year (in a physical NHL).”

Sandin can take the extreme tact of not coming to camp and there’s the chance another team takes a shot at him with an offer sheet, but Dubas shrugged it off.

“If there is going to be a sheet, the sooner the better so we can make our decision and move on.”

Forward Colin Blackwell is also going to be a UFA, but at camp he’ll be up against some Marlies who pressed last year, such as Nick Robertson and Nick Abruzzese.

“We’d like it to be a really healthy competition between both (farmhands and free agents for bottom-six jobs),” Dubas said. “We’ve lacked in the past guys in those spots who’ve pushed and play the way we want them to down there. Now we have guys who can do that and it was laid out really clearly in their exit meetings ‘this is what we expect of you, this is the opportunity, now go and put the effort in this summer to go and take it.’

“But we can’t count on all of them being at their best, we need to supplement that with some free agency. They obviously won’t be the most enticing signings, but they are hugely important.”

We apologize, but this video has failed to load.

The draft itself will see the Leafs pick 25th overall, barring a trade, positioned that high only once the past four years after trades to bolster playoff hopes did not work out. Dubas, who has a new head amateur scout in Wes Clark, agreed it’s a challenging draft year with just two picks in the top 80 and three overall, with the added uncertainty of Russian juniors in light of the sanctions against that country, though whatever the nationality of the one chosen Thursday night, he’ll likely not burst on the NHL scene.“

In the end, you need to look back five, 10 years from now and say ‘we picked the best player’. To have a guy just jump in so we can say we got him for (an entry level) $925,000 or lower is not the smartest thing for us.”