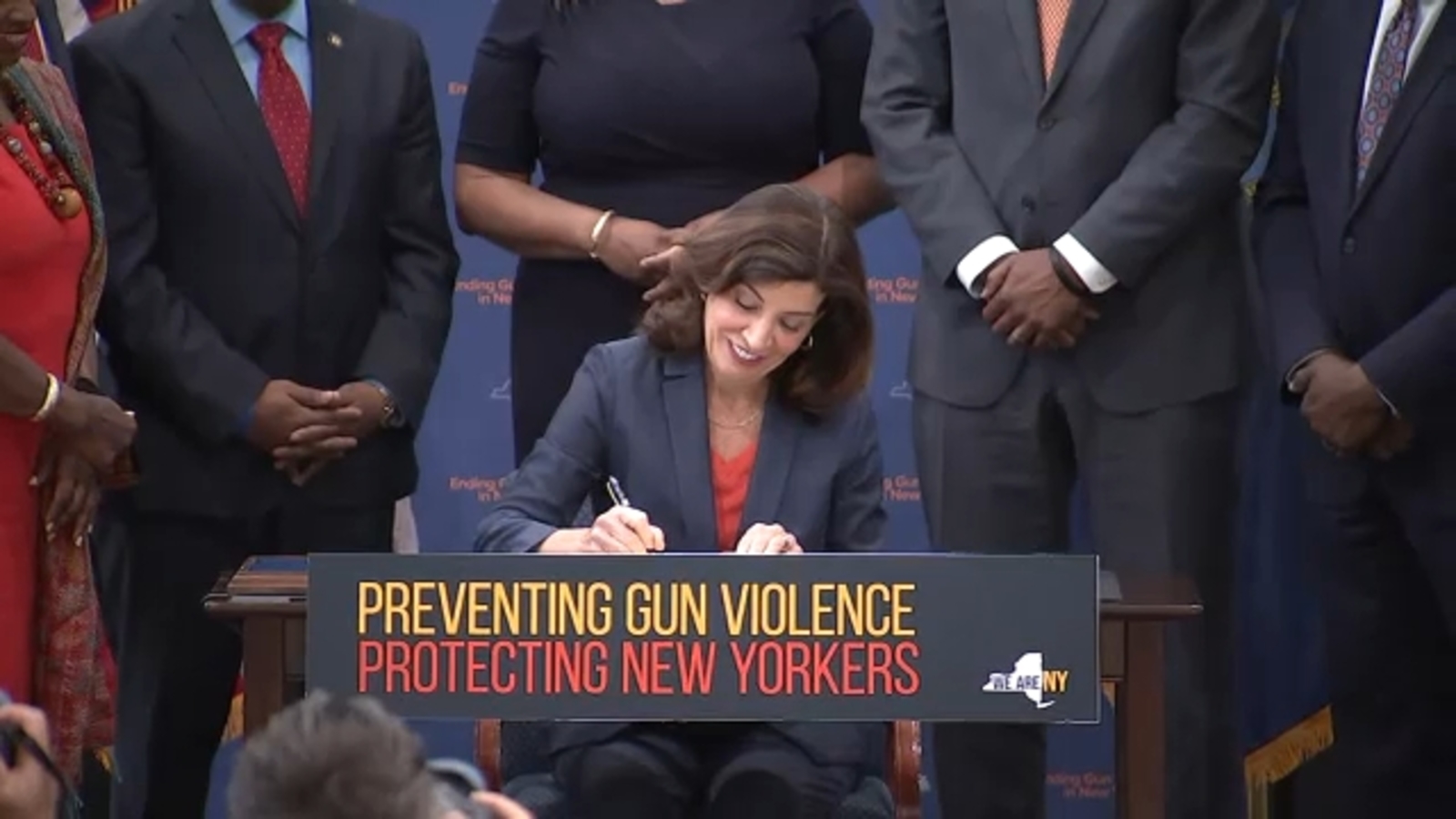 NEW YORK (WABC) — Elected officials in New York and New Jersey wasted no time voicing their opinions and talking about the next steps after the Supreme Court ruling to strike down the concealed carry law in New York.

Governor Kathy Hochul said while the decision necessitated no immediate change to New York state law, she anticipates a rush to get concealed carry permits, using the decision as justification. But people can’t immediately start walking around with a concealed weapon.

Governor Hochul will call a special legislative session to address the permitting process for concealed carry and attempt to limit places where concealed carry is allowed and to give businesses and property owners the ability to ban concealed weapons.

The state will be looking at “sensitive locations” where concealed carry will be banned. When asked if all of New York City is one, Hochul said, “In my opinion, they are.” However, the Supreme Court opinion seems to disagree.

New York City Mayor Eric Adams released a statement saying,
“Put simply, this Supreme Court ruling will put New Yorkers at further risk of gun violence. We have been preparing for this decision and will continue to do everything possible to work with our federal, state, and local partners to protect our city. Those efforts will include a comprehensive review of our approach to defining ‘sensitive locations’ where carrying a gun is banned, and reviewing our application process to ensure that only those who are fully qualified can obtain a carry license. We will work together to mitigate the risks this decision will create once it is implemented, as we cannot allow New York to become the Wild West.

“One thing is certain: We will do whatever is in our power, using every resource available to ensure that the gains we’ve seen during this administration are not undone, to make certain New Yorkers are not put in further danger of gun violence. This decision may have opened an additional river feeding the sea of gun violence, but we will do everything we can to dam it.”

Manhattan District Attorney Alvin Bragg said, “This decision severely undermines public safety not just in New York City, but around the country. While the Court has now made it more difficult to limit the number of guns in our communities, I am committed to doing everything in my power to fight for the safety everyone in this city deserves, and we have been preparing for this decision for weeks. New York still has some of the toughest gun laws in the country on the books, and we will continue to use these statutes to hold accountable those who commit gun violence. At this very moment, my office is analyzing this ruling and crafting gun safety legislation that will take the strongest steps possible to mitigate the damage done today. Furthermore, we have already built detailed processes and put them in place to manage any litigation related to our ongoing cases. The Supreme Court may have made our work harder, but we will only redouble our efforts to develop new solutions to end the epidemic of gun violence and ensure lasting public safety.”

“Based on a deeply flawed constitutional methodology, a right-wing majority on the United States Supreme Court has just said that states can no longer decide for ourselves how best to limit the proliferation of firearms in the public sphere. Let there be no mistake – this dangerous decision will make America a less safe country.

“But let me be equally clear that, here in New Jersey, we will do everything in our power to protect our residents. Anticipating this decision, my Administration has been closely reviewing options we believe are still available to us regarding who can carry concealed weapons and where they can carry them. We are carefully reviewing the Court’s language and will work to ensure that our gun safety laws are as strong as possible while remaining consistent with this tragic ruling.”

Also making his voice heard, former New York State Governor Andrew Cuomo, “This is another devastating setback in our fight against gun violence and it only underscores the need for bolder gun reforms on the national level. Because of this ruling, we’re now back to where we were in 1910, but it doesn’t have to remain this way. Not only should combatting this decision be part of any final gun package before Congress but so should assault weapons and high-capacity magazine bans. Allowing unchecked concealed handguns in cities across the nation will only increase the number of lives lost to gun violence and avoiding real action to prevent more mass shootings like what happened in Buffalo and Uvalde will only lead to further senseless bloodshed. The American people have already suffered too much.”

Submit a tip or story idea to Eyewitness News

Have a breaking news tip or an idea for a story we should cover? Send it to Eyewitness News using the form below. If attaching a video or photo, terms of use apply.