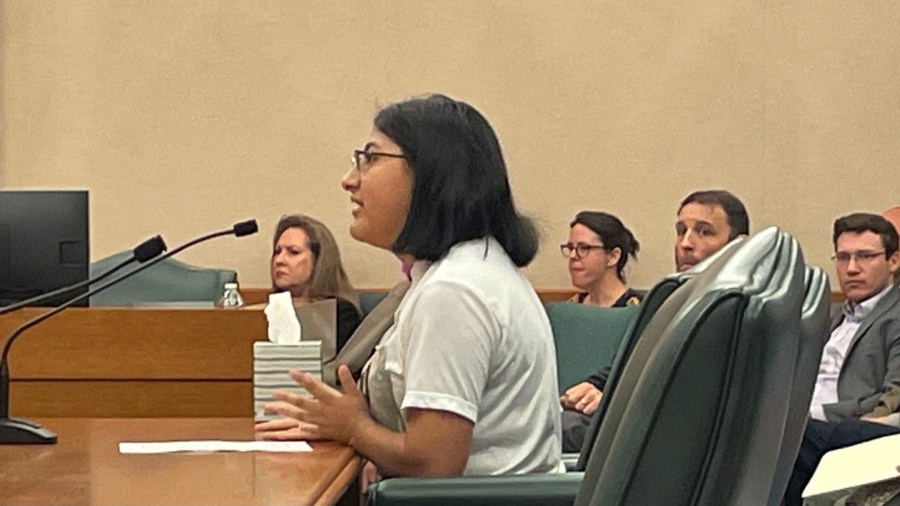 AUSTIN (KXAN) ⁠— Family members and supporters of some of the Uvalde school shooting victims offered emotional testimony Thursday at the Texas Capitol.

Their remarks were part of a joint session of the House Homeland Security & Public Safety committee and the House Youth Health & Safety select committee.

“I’m here begging you guys to do something,” Uvalde High School student Jazmin Cazares told the panel of twenty-seven lawmakers.

Cazares lost her 9-year-old sister Jacklyn “Jackie” Cazares and her 10-year-old cousin Annabell Rodriguez in the school massacre that took the lives of 19 Robb Elementary School students and two teachers on May 24.

“I woke up this morning around 5:30 and I sat on my sister’s bed, and then I drove four hours to be here,” Cazares said. “I shouldn’t have to be here right now.”

Wearing a t-shirt with her sister’s photo on it and with her family seated behind her, Cazares expressed frustration with the school’s safety measures and the response by law enforcement.

“The people who were supposed to keep [Jackie] safe at school didn’t,’ she said. “They failed.”

The House committees are charged with gathering information and preparing reports on school safety, gun violence and mental health challenges.

No legislation can be passed during the interim hearings. That will be up to the full legislature, which will next meet in January.

“This issue is bigger than politics,” said Rep. Chris Turner (D-Grand Prairie). “Any elected official should look at it through that lens and do what’s right for the people of Texas.

Earlier in the week, the Governor’s Office said all options remain on the table.

“Governor Abbott has taken immediate action to address all aspects of the heinous crime in Uvalde, including issuing six directives to make schools safer,” said a spokesperson in a statement, adding that more announcements would come.

Check back for updates to this story.