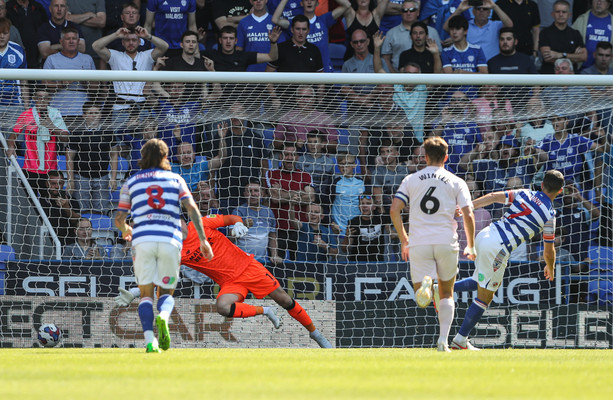 SHANE LONG GRABBED a goal to help Reading come from behind to claim a 2-1 victory at Cardiff.

Fellow Ireland international Callum O’Dowda gave the home side the lead early on with a well-directed header but Long, making his first Royals start for 11 years, equalised from the penalty spot before the break.

It was his first goal for the club since scoring twice at Cardiff in Reading’s 3-0 victory in the second leg of their Championship play-off semi-final in May 2011.

Long moved to West Brom early the following season. Now 35, he re-signed for Reading after being released by Southampton this summer.

Tom Ince, son of Reading manager Paul, made it 2-1 in the 63rd minute with a rasping effort from distance, and Cardiff were unable to mount a comeback.

Blackburn got an immediate return from their new signing Sam Szmodics as he opened his account on his debut to set up a 3-0 win over Swansea at the Swansea.Com Stadium.

The 26-year-old Irish attacker played for Peterborough in their 1-0 win over Cheltenham in Sky Bet League One last weekend, but he then agreed a three-year deal with Rovers two days later and was given an early chance to shine by new boss Jon Dahl Tomasson.

It was former Swan and Wales international midfielder Ryan Hedges who picked Jay Fulton’s pocket as the home side attempted to play the ball around their back line.

Once he had possession, Hedges headed straight towards the Swansea goal before squaring to Szmodics, who made no mistake from the edge of the area as he picked his spot in the right corner of Andy Fisher’s home goal.

That goal dented the home side’s confidence and encouraged Rovers to press forward far more. Swansea opened the second half with three corners, and close-range efforts from Joel Piroe and Michael Obafemi, but they never looked convincing.

Things went from bad to worse for Martin’s men when Ben Brereton Diaz outmuscled Joel Latibeaudiere as he raced onto another great ball into space by Hedges and ran 20 metres before chipping over the advancing Fisher for a second goal just before the hour mark.

As the home fans grew more and more frustrated their hopes of seeing at least one goal from their side were thwarted when Tayo Edun cleared off the line as substitute Matty Sorinola looked all set to open his account for his new club.

The final nail in the Swansea coffin was hammered home by Rovers skipper Lewis Travis as the visitors flooded forward in the 84th minute after once again stealing possession.

Irish defender Jimmy Dunne was on target as QPR held off a Middlesbrough fightback to win 3-2 and give Michael Beale his first victory as boss.

Chris Willock, on his return from injury, netted a brilliant opener before goals from Dunne and Lyndon Dykes put Rangers in control.

Matt Crooks scored shortly before the interval and Marcus Forss’ goal — his first for Boro — 11 minutes into the second half increased the visitors’ hopes of pulling off a comeback.

But they were unable to find an equaliser and ended the match with 10 men after Meath native Darragh Lenihan was red-carded in injury time for bringing down Macauley Bonne, who would have been through on goal.

Stoke’s home Championship campaign began with a comfortable 2-0 victory over Blackpool. Michael O’Neill handed home debuts to six of his Stoke players, including Irish U21 international Will Smallbone, who won the man-of-the-match award for his performance.

The Potters, who sat bottom after a 2-0 defeat at the hands of Millwall on the opening weekend of the season, took control of the fixture after the half-hour mark.

Arsenal loanee Harry Clarke nodded in on his home debut to give the hosts the lead and a Jacob Brown strike in the second half tightened their grip on the tie.

Get closer to the stories that matter with exclusive analysis, insight and debate in The42 Membership

Preston’s frustrating start to the season continued as they failed to score for the second successive game as Ryan Lowe’s side were held to a drab 0-0 draw by Hull at Deepdale.

Sheffield United cruised past Millwall to pick up their first points of the new season with a convincing 2-0 win at Bramall Lane.

First-half goals from Iliman Ndiaye and Sander Berge sealed victory for Paul Heckingbottom’s men, who could have a third goal before the break only for Oliver Norwood to see his penalty saved.

Everton loanee Ellis Simms marked his debut with two goals as Sunderland gained their first three-point haul since returning to the Sky Bet Championship with a 3-2 win at Bristol City.

In League One, Marcus Harness scored his first goal for Ipswich, as they beat Forest Green Rovers 2-1.

Meanwhile, it was a day to forget for Galway’s Conor Shaughnessy, as he was sent off in the first minute of Burton Albion’s 4-0 defeat at home to Bristol Rovers.