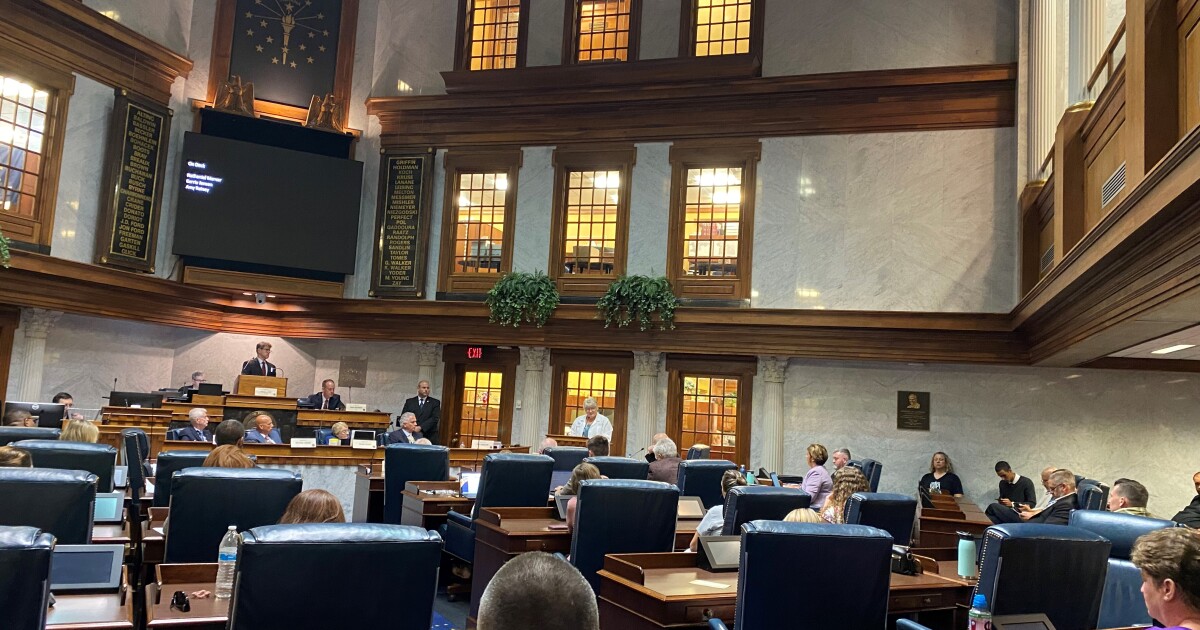 INDIANAPOLIS — Just before 10 p.m. Friday night, the Indiana Senate approved Senate Bill 1 and sent it to the desk of Governor Eric Holcomb.

Just after 11 p.m., Holcomb announced his support and signature to the bill.

SB 1 outlines a near-total ban on abortions in Indiana with exceptions for rape, incest and the life of the mother.

Leaders and lawmakers both locally and nationally are speaking out after the passage of the bill.

“Across the county, states with bans on abortion are facing numerous lawsuits, and these laws are being blocked in the courts. The ACLU of Indiana exists to defend Hoosiers’ rights as protected by the U.S., and the state constitution. You can guarantee that our legal team will be working with partners to evaluate every legal avenue available to defend abortion access here in Indiana.”

It is a dark day in the state of Indiana. The General Assembly has passed a ban on abortion, turning back the clock 50 years on Hoosiers’ fundamental right to control their own bodies. S.B. 1 will force women to either travel hundreds of miles or carry pregnancies against their will, resulting in life-altering consequences and serious health risks. This is an unconscionable attack on our freedom.

Indiana is, once again, making history by passing legislation that takes our state backward. Despite an unprecedented turnout from Hoosiers who oppose a ban on abortion, Indiana has become the first state in the country to pass a new abortion ban since the Supreme Court overturned Roe v. Wade.

Hoosiers have a constitutional right to privacy, and these deeply private, personal, and unique decisions should be made by women in consultation with their doctors. What is right for one family may not be right for another.”

Katie Blair, advocacy and public policy director at the ACLU of Indiana

“We believe substantive changes to SB1 in the House provide renewed hope that over 95 percent of Indiana’s 8,414 abortions will end if it becomes law. The House amendments will make abortion clinics a thing of the past in Indiana effective mid-September, and abortions for limited circumstances will be performed only in hospitals or hospital-owned surgical centers.

We are, nonetheless, disappointed that an amendment to limit abortions to only the life of the mother fell short in a roll call vote. Yet we applaud those House members supporting the amendment for doing all they could to limit SB1’s exceptions. We will continue to work to build consensus going forward that all lives are to be valued, regardless of the means of one’s conception.

Although we cannot fully endorse the amended SB1 due to its rape, incest, and lethal fetal anomaly exceptions, we do acknowledge the path forward is to either embrace the potential to end the vast majority of abortions in Indiana now, or to allow all abortions to continue under current law, making Indiana an abortion-destination state and driving abortion numbers even higher.

We encourage Gov. Holcomb to sign SB1 into law. It’s time for Indiana to move forward in love and compassion by expanding protections for unborn children.”

“I am deeply disappointed that the excessive majority chose to pass Senate Bill 1 and roll back the clock 50 years. They chose to listen to a special interest group over everyday Hoosiers, who adamantly oppose this cruel bill. The ramifications of this legislation for women are endless, even deadly. That’s not hyperbole—in a state with the 3rd highest maternal mortality rate in the nation, this ban will kill women. The majority are not ending abortions, only safe ones. I firmly believe that this bill denies a woman bodily autonomy and her right to make her own healthcare decisions.

During testimony, we heard many faith leaders—Christian and non-Christian—speak in adamant opposition to this bill. SB 1 undermines the many religions in Indiana that have diverse thoughts and beliefs on the subject of life and abortion. No one religion should trump another under our laws.

Finally, not one Hoosier genuinely testified in favor of the bill. The people of Indiana are against SB 1 and we should have scrapped the bill in the Senate. Unfortunately, we did not, and I encourage Hoosiers to reach out to Governor Holcomb and encourage him to veto this cruel bill.”

“I’m extremely disappointed the Statehouse Republicans passed this extreme legislation that restricts reproductive rights in Indiana, disregards science and medicine, and forces one religious view on all Hoosiers regardless of their religious or non-religious values. In a pluralistic society, legislators should not impose their religious beliefs to restrict civil liberties and freedoms of any citizen. SB 1 is an extreme government overreach and an unfunded mandate in a state that is ill-equipped to serve Hoosier children, foster youth, adopted children, and already ranks in the bottom ten nationally on infant and maternal health. I don’t believe that the God of any faith promotes rape or incest or that any child should be forced by the government to carry another child from those horrific acts. I trust Hoosier women to make these decisions in consultation with their physicians and faith if they choose to rather than a male-dominated, non-medical, General Assembly making health decisions for women. Legislators shouldn’t play God or politicize women’s healthcare. I stand with all Hoosier women and will continue to champion their freedoms and civil liberties.”

“Like the majority of Senate District 42 constituents who answered my survey, I believe every mother and unborn child are worthy of dignity and legal protection, and today the Indiana legislature made great strides in ensuring that through Senate Enrolled Act 1.

The bill includes exceptions for rape, incest, life or physical health of the mother and fatal fetal anomalies with time limitations.

As we see more babies born in a post-Roe world, Indiana must do everything it can to support women in delivering and raising healthy children, while helping them prevent unexpected pregnancies through contraception and education. In doing so, Indiana will continue to be a home for many to feel treasured and supported in leading fulfilling lives.”

“This is a monumental day for the unborn in Indiana. By closing abortion clinics and limiting abortions to only the most heartbreaking instances, we are making massive strides for the pro-life movement. These steps, combined with funding increases directed toward pregnancy services and easing the financial burden of adoption, put Indiana in a position to be a shining example of how to move past abortion and give mothers and families the ability to raise happy, healthy children.”

“Tonight, I voted no on because it does not strike the right balance for women to make their own health decisions while also protecting the life of the unborn. Further, the time allowed for the exceptions for rape or incest victims and for fatal fetal anomalies is far less than I believe is appropriate.”

“This attack on maternal health is outrageous and we call on Governor Holcomb to side with the majority and veto S.B 1. This abortion ban would deny Hoosiers the care they need, with catastrophic impacts on Indiana’s already dire maternal mortality crisis. The Indiana government is inserting itself into private decisions about when and whether to have children and it is unconscionable and unacceptable. We cannot let extremist Indiana lawmakers take away our control over our own bodies. We must put the people of Indiana first and stop this ban here, now, and permanently.”

“If this body really believed in liberty, autonomy and small government, this bill would have been dead on arrival. It wouldn’t have even been considered, let alone passed. As it stands, today marks a backward slide into history, into a past where the lives and destinies of women are dictated by their government. The Republicans seem intent on pushing their religious beliefs, their moral crusade and their own backwards attitudes onto Hoosiers against overwhelming opposition. Meanwhile, as they rush through stripping women’s rights and ignoring 50 years of legal precedent, Republicans say ‘next session’ to Democratic pushes to improve support and services for pregnant women and infants. Republicans’ vision for our state and their policy stance has never been clearer: Welcome to the new Indiana, where forced birth is a moral imperative, and your individual rights are subject to extremist big government intrusion.”