Havea “Harvey” Tukutau, aka Rev. da IV, knew he had been in Greeley long enough to call it home when he stopped noticing its infamous smell. “A lot of people know Greeley for its smell, because it stinks. They have a big slaughterhouse, so it smells like rotting meat,” he says. “Not all the time, but at least once a week you’ll step out and be like, ‘Oh, Greeley is doing its thing.’ But I’ve been there long enough to where it doesn’t bother me anymore.”

Born in Denver to immigrant parents from the South Pacific island of Tonga, Tukutau was raised in nine different cities across Colorado, Wyoming and Utah before settling in Greeley after graduating high school. After six years, it’s the longest he’s ever been in one place. “It’s a big small town,” he says of Greeley. “I feel like everyone knows each other, or knows of each other, but it’s also really big. It’s crazy to me even in the last six years how much it’s grown.” This weekend, the 24-year-old Tukutau will play his biggest show yet at the Greeley Stampede, the largest annual event in Greeley. He’s even opening up for Chingy and the Ying Yang Twins.

Though Greeley may be better known for its smell than its music scene, the city is home to many musicians and artists, whether they’re just passing through or life-long residents. “Greeley is like a pit stop for a lot of artists. They either go there for college, or they’re there because they found cheap rent in Greeley. I haven’t met too many artists that are actually from Greeley, that currently reside in Greeley,” Tukutau says.

When asked if there’s much of a hip-hop scene in Greeley, he hesitates. “Yes, but not on the level where I believe it probably should be. Because I feel like a lot of these rappers have a small town mentality, where they’re really just trying to be the biggest in their town. When, there’s enough talent and enough food on the table for everyone to be bigger than just their town.” He notes a few exceptions, mostly those who have successfully used Greeley as a stepping stone: “There’s been one dope rapper that made a pit stop in Greeley, because of Fort Collins, his name is Devin Tremell. He was one of the bigger artists in that northern Colorado area for a while, until he moved down to Denver. Anville was huge, he’s actually from Johnstown, which is like fifteen minutes outside of Greeley. He’s now living in L.A. Mitchell James, he made a pit stop, because I think he was going to school at CSU.”

But so far, there hasn’t been a stand-out artist from Greeley who has broken out of that bubble while still claiming the town as home. Tukutau, however, aims to be that artist. He praises Josh Fisher, who runs the Greeley recording studio Soul Sessions, for uniting and elevating Greeley’s “undefined” music scene. Soul Sessions opened in March 2017 as a studio for artists of all genres, but quickly became the go-to studio for Northern Colorado hip-hop artists. At the time, the only other professional recording studio in the area was at UNC.

“Josh Fisher is one of the dopest guys I’ve ever met. I give a lot of credit to Josh and Soul Sessions, because a couple years ago they did a bunch of shows, they’re doing things with the Moxi Theater, which is like the premiere venue in Greeley. It was all their guys from Soul Sessions, and he asked me to be a part of it too,” Tukutau says. “I give a lot of credit to him for giving me that time to perform, and understand myself as a performing artist a lot more. I feel like that helped establish the way I perform now.”

Rev.’s motto as an artist is “Everything I do is with friends.”

Tukutau stands out from other burgeoning Colorado artists for his sheer tenacity, his firm but understated confidence and his persistent optimism, which pushes him to pursue opportunities no matter how unlikely they seem. His very first recorded single, the gospel-tinged anthem “Better Days,” was produced by Grammy-winning producer Professor Fox, all because Tukutau cold-called him a whim. He booked his first big show, opening for soul-funk band Phony Ppl, after emailing every Colorado venue he could think of, including Cervantes, where the concert took place in 2019. This year, when he decided to refocus on music after taking a break during the pandemic, he followed the same methods.

“A couple months ago, I sent out a mass email to different universities and venues, just trying to get booked,” he says. “That’s how I got my halftime show at UNC. After that, I sent out emails to these rodeos and festivals, like the Greeley Stampede, Cheyenne Frontier Days, Taste of FoCo, different things like that.” Within a week, the Greeley Stampede had booked him for the annual festival and rodeo.

“I honestly thought, ‘I’m getting scammed,'” he says with a laugh. “‘I was like, ‘Okay, what’s the performance fee?’ Because I thought they were going to hit me with like, a $500 performance fee, for me to pay. But no, it was really cool.”

He also had no idea that he was going to be opening for hip-hop icons Chingy and the Ying Yang Twins until weeks after he had accepted the booking. “They were just breaking down what the day is going to look like, and how much room I’ll have on stage, and they were like, ‘So Chingy and his guys are already going to have their stuff on stage,’ and I was like, ‘Did you say Chingy?’ And they said, ‘Oh, yeah. And the Ying Yang Twins.'”

It’s serendipitous connections like these that keep Tukutau going in the face of rejection. “I’ve definitely been told no. The ratio is probably like 99 to one at this point,” he says. “At first it would hurt, but I just got used to it, and I was like, ‘I just have to keep it pushing.’ That’s something I’ve been focused on a whole lot: Keep it pushing, and reach out wherever I can.”

The Greeley Stampede will be Tukutau’s biggest gig yet, and locals are buzzing with excitement to see a Greeley artist on a lineup with the likes of Braid Paisley, Jo Dee Messina, and, of course, Chingy and the Ying Yang Twins. While most of the other music acts are country stars or rock groups, Tukutau emphasizes that the Stampede is “not just white cowboys.”

“Everyone goes,” he says. “It’s almost like the county fair. There’s a carnival, all the booths with the carnival games there, all the tents set up for vendors, and then they also have the crazy rodeo going.” Pop-up performances on two different stages will take place alongside activities including duck racing, longhorn drives, face painting, parades, livestock competitions and more.

Tukutau is both excited and anxious about his upcoming milestone performance, he says. “It feels like I keep taking huge steps forward. It’s a little nerve-wracking, like last night me and my brother and some homies went downtown, and people were coming up to me like, ‘Bro are you excited for the stampede? That’s going to be dope. Opening up for Chingy and the Ying Yang Twins? That’s crazy.’ And I’m like, ‘Yeah bro! I wasn’t thinking about it much until you said something!'”

Originally Tukutau planned on performing at the Stampede with a live band, but says the search for reliable musicians was “awful.” After losing a guitar player and two keyboard players, he realized that hiring random musicians went against his original intention and guiding motto: “Everything I do is with friends.” He explains, “It just wasn’t coming together the way I wanted it to. Like everything before, I just wanted it to be with my homies, and at a certain point I was just hiring strangers. That’s not the way I envisioned it at all.” However, he will still have one special guest musician at the Stampede: saxophonist Diego Gonzales, whom he befriended while playing basketball in Greeley. Gonzales plays sax on Tukutau’s track “Can’t Dream,” and frequently joins him on stage to provide live instrumentals. 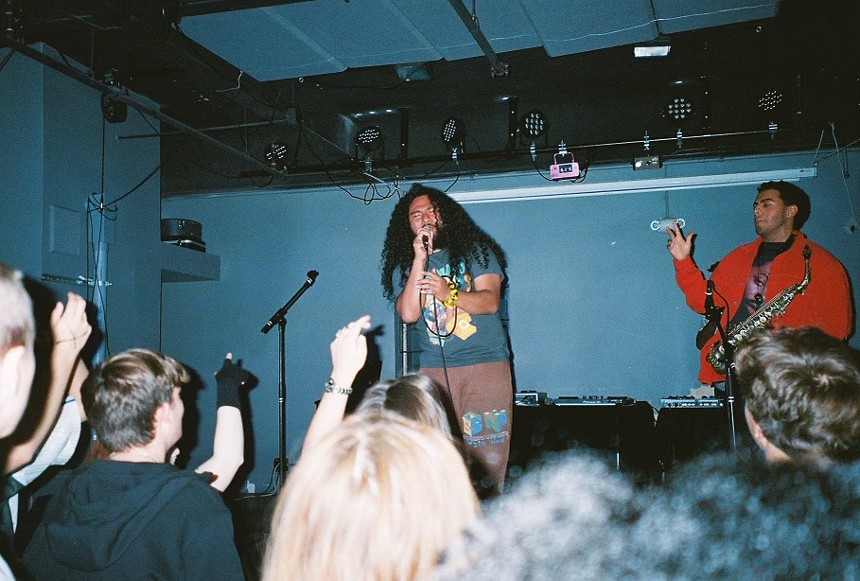 Saxophone player Diego Gonzales (right) will be joining Rev. on stage at the Stampede.

The number one question Tukutau gets asked by friends, family and fans is, “When are we getting new music?”

Tukutau, whose last release was the four-track EP Oh YAWP! in 2020, promises it’s coming: “We’ve been working a whole lot; I’ve never been in the studio so much in my life. Which is really dope, but it’s really tiring as well. I keep telling myself these late nights and early morning are going to be worth it.” He frequently will stay in the studio until 4 a.m., sleep for an hour or so, and then get up at 6 a.m. to go to his day job at the Boys and Girls Club, or to volunteer with the Rainbow Coalition of Greeley, a local community outreach organization. With all the hard work that he’s put into his new music, he’s being particularly strategic about when and how it will be released. “I’m at a point where…if I release a song, it’ll be big locally. But I’m wanting a grander stage,” he says.

But the promotion and marketing campaigns necessary to expand his following cost money, and Tukutau’s booking fees have yet to catch up to his aspirations. He was approached by a PR firm that has worked with artists such as Koda the Friend and Kemba, but wants to secure the funding to pay it before entering into any sort of agreement. So, he’s turning to the community that he knows best for support, and has already gotten some interest from local businesses including WeldWerks, Fat Shack and Organic Alternatives, a dispensary in Fort Collins.

“Going into all these meetings and writing all these pitches, I’m looking at it like they’re a label. I’m asking for this much money, and I have to fulfill these requirements,” he says. “The plan right now is to get all my sponsors in order, then after the Stampede show, do a meeting with them and figure out if I really brought value to them in the way that they envisioned, and the way that I envisioned, and figure out if this is a relationship that can continue to grow.” 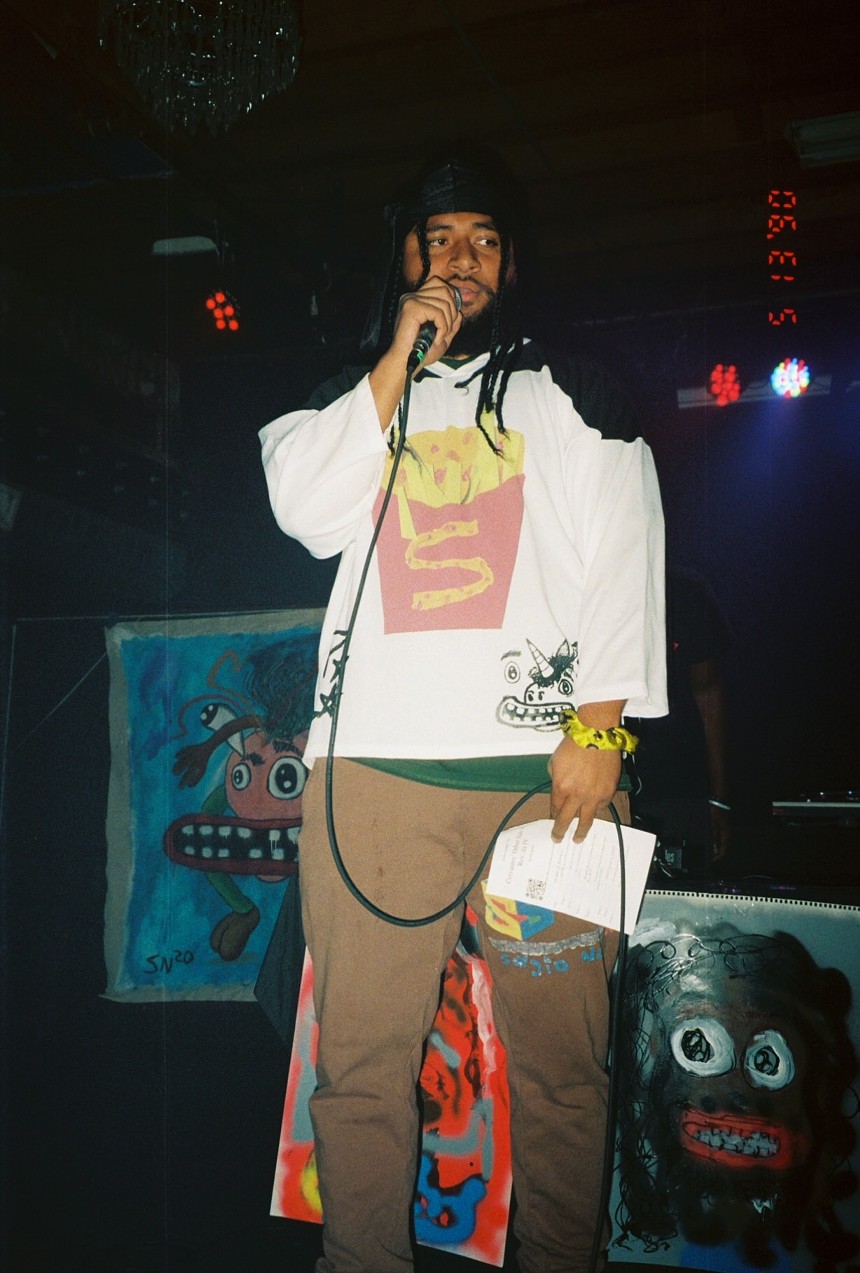 After performing at the Greeley Stampede, he’ll be releasing a single called “Still Me” in late July or early August, then following that up with regular single releases, leading up to his second EP. For a sneak peek of his new music, go to any of his live performances, where he almost always teases the audience with stellar unreleased material.