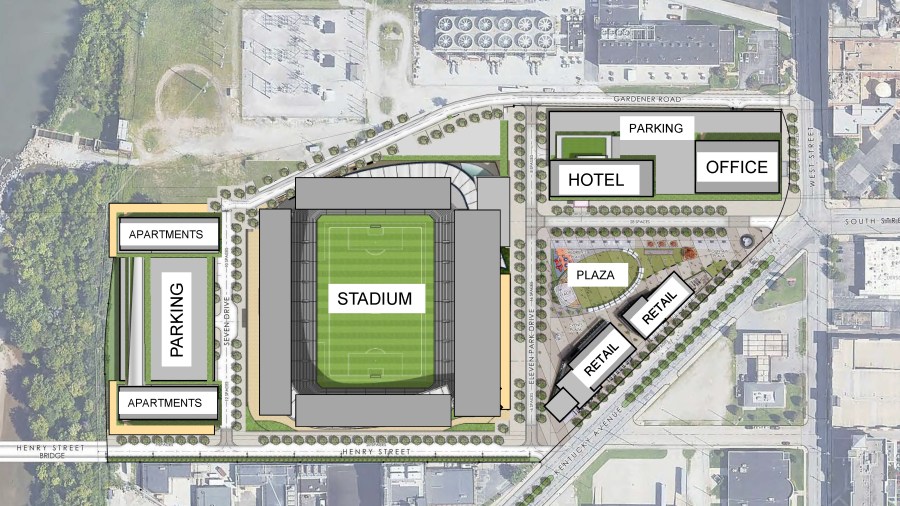 INDIANAPOLIS — It looks like the Indy Eleven soccer team will finally get its own home stadium. A $1 billion 18-acre “Eleven Park” complex is in the works on the western border of downtown Indianapolis, reports IBJ.

Apartments, a hotel, office building and retail space will be built along with a 20,000-seat soccer stadium.

“The project would be a public-private partnership with the city and state taking the lead on financing,” writes IBJ. The city and state financing would apply mainly to the stadium, with Keystone Corp. developing the retail space, office building, hotel, and apartments.

The city of Indianapolis is expected to provide tax incentives or other financing to help fill gaps in funding, IBJ confirms.

Construction for Eleven Park could begin in early 2023 and would likely be complete by spring of 2025.

The City of Indianapolis Capital Improvement Board (CIB) would own the Eleven Park stadium, while Indy Eleven would lease and operate the venue.


Pacers pick Arizona’s Mathurin with 6th pick overall; Who else is joining the team

Indy Eleven’s owner and chairman Ersal Ozdemir (also owner of Keystone Corp.) told IBJ Eleven Park could also be used for concerts too large for the TCU Amphitheater at White River State Park or too small for Lucas Oil Stadium.

“We have been working diligently for the last several years to secure a large area of land downtown for Eleven Park, and with our prime location now secured we are eager to take the next steps for this groundbreaking development,” said Ozdemir. “

The facility will also be designed to host soccer, lacrosse, football, rugby, and field hockey events for the NCAA and IHSAA, according to a release from Indy Eleven.

The Indy Eleven currently play in IUPUI’s IU Michael A. Carroll Track & Soccer Stadium on W. New York Street. The team was founded in 2013 as part of the North American Soccer League. It joined the United Soccer League in 2018.