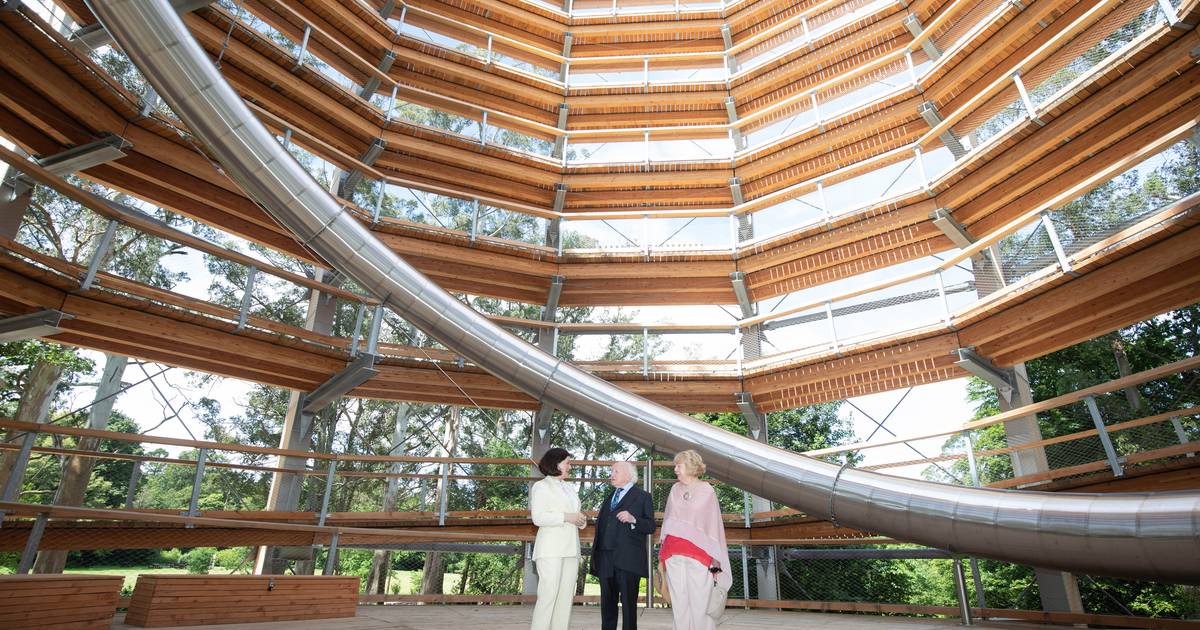 A new all-accessible, suspended treetop walkway through Avondale Forest Park that takes visitors to an eye-catching 12-storey tower and slide has opened in Co Wicklow.

The attraction, to be known as Beyond the Trees, is in the lee of Avondale House, which was, as noted by Mr Higgins, established in 1770 by Samuel Hayes, a young barrister and keen naturalist, who realised the native forests of Ireland were disappearing. It was Mr Hayes who set about creating a forest park on his land as an example of well managed forestry. When he died the estate was inherited by the Parnell family.

The new cafe, exhibition space, Coillte pavilion and children’s playground all line one side of the walled garden of the former home of the Irish parliamentary party leader, Charles Stewart Parnell, which the then state acquired as far back as 1904, to develop forestry services.

Following his guided tour Mr Higgins extolled Coillte’s approach to creating a sustainable attraction, which he said brought together many needs; that of producing timber that can help in the State increase its carbon capture; increasing the State’s supply of sustainable buildings using wood in their construction; protecting biodiversity in woodlands; helping ameliorate climate change; encouraging recreation, with its attendant health benefits; and providing a fully accessible attraction for people with disabilities or special needs.

Mr Higgins also said facilities such as Avondale provided timber to increase the State’s supply of “desperately needed” housing. But the President did not repeat any of his earlier controversial remarks about the nature of the State’s housing crisis, confining himself to praising the work of “so many agencies of government” involved in the Avondale project.

He added: “In terms of lived experience, may I suggest that places like Avondale House and Forest Park allow us all — people from diverse walks of life, of all ages and backgrounds — to reconnect with nature, to reaffirm its critical position in our lives, perhaps even to commit to taking individual and collective actions to protect it, to tackle declining biodiversity and climate change.

Sean De Burca from Galway played a grand piano on the terrace of Avondale’s new Seed Cafe as several hundred invited guests, led by Minister of State for Forestry Pippa Hackett, enjoyed a rare bit of summer sunshine at the launch on Wednesday.

Orla Carroll, product development director of Fáilte Ireland, said 60 full- and part-time jobs had been created to staff the site to cater for an anticipated 200,000-250,000 visitors in its first full year. The attraction will include a state-of-the-art “changing place” for visitors with special needs. Wheelchairs are available for loan on site and a sensory garden in the courtyard area is designed to be a welcoming space for those who have sensory-processing challenges, including autism, physical disabilities and dementia.

Entry to the Seed Cafe, Walled Garden and Coillte Pavilion is free of charge. Tickets to access the treetop walk and viewing tower cost €14 per adult, €11 per child (under-threes free); family tickets are €38 for a family of up to five; and student and OAP rates are also on offer.