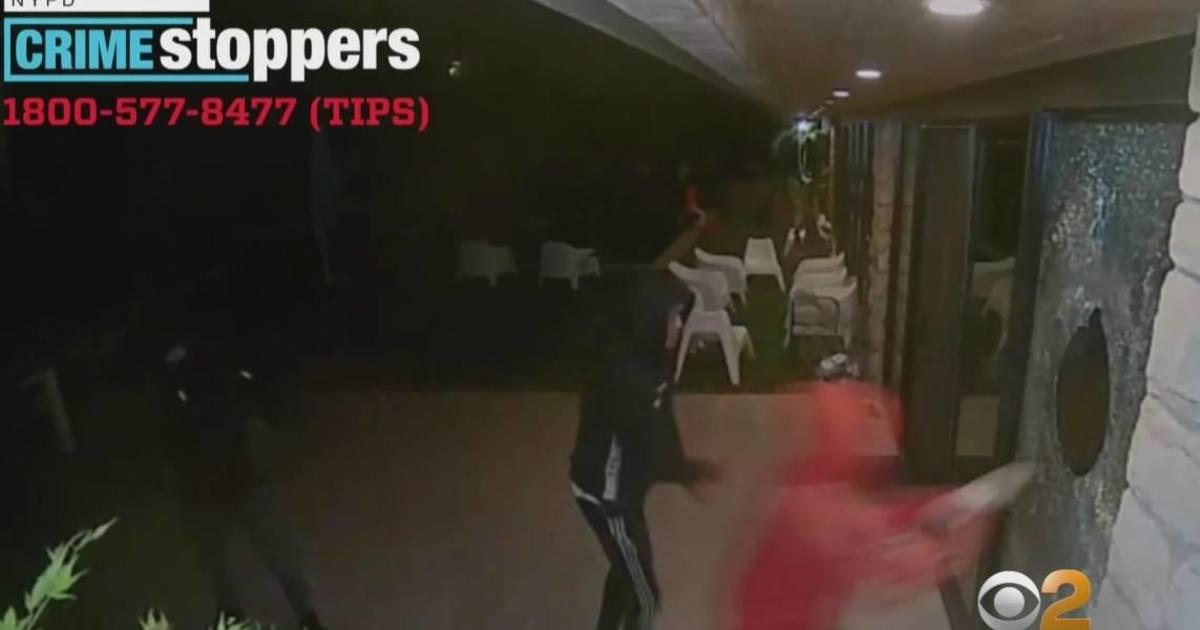 NEW YORK — A Staten Island couple spoke out Thursday about a terrifying break-in at their home. They’re hoping to warn others to be on alert.

As CBS2’s Andrea Grymes reported, the break-in is part of a larger pattern under investigation by the NYPD.

“At 3:30 in the morning, we had a very scary experience,” Marcello Sciarrino said.

Monday morning, While Sciarrino, his wife and children were soundly sleeping, security video caught a group of suspects outside the back door of their home in the Todt Hill section. One suspect hurled a large stone, shattering the glass, and the group rushed inside.

“We hear what seems to be an explosion,” Sciarrino said. “I was shocked when I ran into the hallway to check on my children and my oldest son is screaming ‘Dad, there’s people in the house!'”

Sciarrino said the group ran away when he came down the stairs, but they stole a set of car keys and the family’s peace of mind.

“You should not be afraid to sleep at night in your home,” Sciarrino said.

The NYPD said it’s part of a pattern of burglaries on Staten Island. On June 12, police believe two of the same suspects tried to break into other homes, one in Tottinville and the other in Price’s Bay.

Then, the suspects allegedly went to Lighthouse Hill, where investigators said they threw a rock through a first-floor window, took a set of car keys and drove off with a Rolls-Royce.

The homeowner told CBS2 he was able to track the car to Newark, New Jersey on his phone and disable it. He said he picked up the car later that morning after the thieves left it.

Thursday, police and Staten Island elected officials held a news conference warning perpetrators they will be caught and prosecuted.

“We are joining forces with the District Attorney, NYPD and anybody else to send a signal that we can’t allow this to happen anymore,” Staten Island Borough President Vito Fossella said.

When police make an arrest in this case, the age of the suspects and the charges will dictate whether prosecutors can ask a judge to set bail, according to the DA.