Add the Copper Pot at 2796 South Broadway to the list of restaurants shuttering in June. The restaurant recently announced that its last day will be June 26. “It’s so sad,” says Joe Jaramillo, who opened the place a decade ago with his then-business partner, Sarah Worton, but sold it in 2018 to longtime employee Eddie Rubio and his family.

The South Broadway Copper Pot is now set to close on the same day that the 41-year-old Annie’s Cafe will serve its last meal on East Colfax Avenue, and the day after Bonnie Brae Tavern will shutter after 88 years — marking the end of one of Denver’s oldest continuously operating restaurants.

The Copper Pot concept will live on, though. Jaramillo and Worton opened the original Copper Pot at 508 East Hampden Avenue in 2010. Two years later, they added the second outpost on South Broadway. “From then until 2016, I was going back and forth between both,” Jaramillo recalls. But in 2017, the Hampden building was sold and torn down for new development.

Back down to one location, Jaramillo had time to reflect. “I was tired, I was burned out,” he says. “It’s such a grueling business, and I realized I didn’t have to work that hard anymore.” When Rubio, with whom Jaramillo had long been close, expressed interest in buying the business, the deal just made sense. The Copper Pot could live on, and Jaramillo could take a much-deserved break.

A “For Lease” sign hangs on the Copper Pot’s South Broadway location on June 23.

He spent 2018 celebrating his daughter’s wedding and “playing a lot of golf,” he recalls. By early 2019, though, he was back in the restaurant business after being recruited to be the proprietor of the Aurora location of Ted’s Montana Grill. That’s where he met Randa Payne, who had been the hospitality manager at Ted’s for fourteen years. The two hit it off, and in mid-2019, Jaramillo got a tip from his linen-service provider that the Garcia family, who owned the Mexican concept Ajuua, had decided to walk away from its location at 6020 South Gun Club Road in Aurora.

Reinvigorated by the idea of opening a new Copper Pot in that space, Jaramillo spent nearly six months negotiating and finally winning over the landlord. He officially took possession of the space on December 1, 2019, completely gutted it  — “It was godawful,” he says of the previous decor — and brought Payne on as co-owner. They opened the Copper Pot at Saddle Rock on February 7, 2020.

Four weeks later, they threw a grand-opening party. Jaramillo’s original Copper Pot partner, Worton, even flew out from California for the celebration with her husband, Darren, Jaramillo’s longtime friend and business partner in an Italian restaurant the two ran together in the 1990s. It was a full-circle moment of celebration.

Then, two days after the party, restaurants were ordered to shut down because of the pandemic. “It was harsh, it was bad,” Jaramillo admits. But despite the challenges of opening in a new market right before a global pandemic, the Copper Pot at Saddle Rock is still in business, serving the same menu of American comfort food that’s made the Copper Pot a neighborhood favorite on South Broadway for a decade. 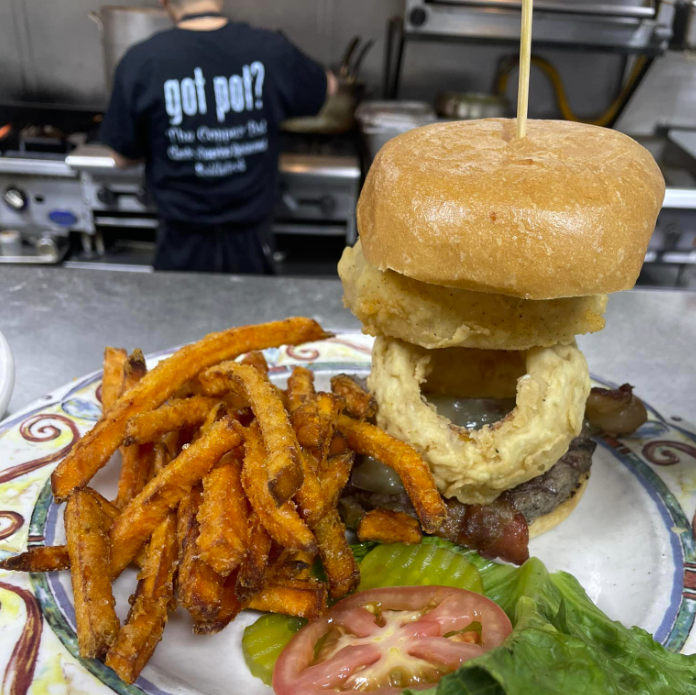 A loaded burger at the Copper Pot at Saddle Rock.

The Copper Pot at Saddle Rock/Facebook

Jaramillo says he tried to support Rubio through the last two and a half years, helping that location secure PPP loans to stay afloat. “It was going well for years, until it wasn’t,” he says.

Money mismanagement that led to issues with the landlord is to blame for the South Broadway closure, according to Jaramillo. Rubio has not responded to a request for comment.

“All of the growth out there [in Englewood] seems promising,” Jaramillo adds. “I’ve been offered the chance to take it back over, but I’m just not sure I could make it successful. I’m not sure it’s a good idea to take over something that’s been driven into the ground.”

Still, whether to let it go isn’t an easy decision. “I put a lot of sweat equity into that place,” Jaramillo says. He also raised his three kids there, teaching them hospitality-industry skills as well as life lessons. “I taught them about the service industry, but also about how to treat the people working in the service industry with respect. They work so hard,” he adds.

Though a “For Lease” sign is hanging on the South Broadway building, Jaramillo says there’s still a small chance he may step in to take it back, but that’s something he needs to discuss with Payne. And as it turns out, she ended up falling in love with the head chef at the Copper Pot at Saddle Rock — the same chef who opened the original Copper Pot with Jaramillo and Worton in 2010 — and the couple is now engaged. “They’re on vacation right now, so I have to talk with them about it,” Jaramillo explains.

But whether he adds the Broadway spot or not, Jaramillo is definitely all in at the Copper Pot in Aurora, and says he’s excited to continue to grow that business for at least the next five years, which is the duration of its current lease.