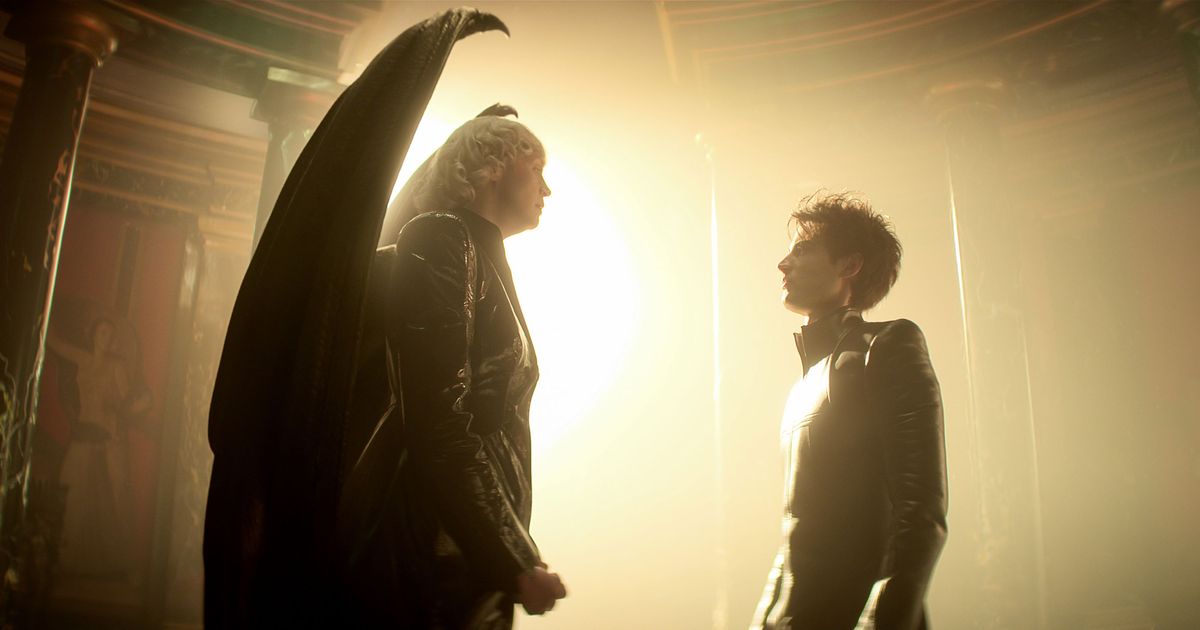 A Hope in Hell

We are nearing the end of our fetch-quest journey. Dream has reclaimed his sand, made a new raven friend, and already knows the general vicinity of his helm. That general vicinity is hell, which is less than ideal, but still. We are hopeful as we start chapter four. Dream brings Matthew to hell, ostensibly because he wants to haze the new guy but really because it can help with the exposition. Matthew is a noob in the world of the occult, and every time he goes “What’s the deal with ____?” is one less time we need an obligatory voice-over from Morpheus. The Sandman comics featured a lot of spooky purple prose from Dream, and if we were stuck inside his head that much on the TV show, things would get too glum too quickly. Still, the show is setting up an entire cosmology. There’s so much information to digest.

Here’s a snippet of the world-building info you’re asked to swallow in this episode: People go to hell if they believe in hell and believe they deserve to be there; Dream had a human girlfriend named Nada that “defied” him 10,000 years ago; Dream changes shape to look like the creatures he’s talking to; Bible-ass God is real, so is Lucifer Morningstar, who used to be the angel Samael until they defied heaven; Lucifer and Dream are both monarchs of their realm in a very nation-state-y sense; Lucifer is more powerful than Dream; Lucifer knows Dream’s siblings; Dream did not side with Lucifer when they waged war on heaven (which also exists); demons are sneaky fuckers with ulterior motives; Lucifer’s right-hand gal is Mazikeen of the Lilim (which means Lilith was real alongside Bible-ass God, Lucifer, Cain, and Abel): Dream’s ravens can travel freely to hell and back.

Got all that? Now imagine Matthew wasn’t there to go, “So the devil used to be an angel, huh?” Sounds tiresome, right? As it stands, the exposition fed to Matthew is a little wearying. Hell is other people … explaining their backstory to you.

Even so, this journey through hell is fun in an entirely different mode than most of Sandman. It has the subtle thrills of a John le Carré novel. “Subtle thrills” isn’t a phrase usually associated with hell, and yet this episode is all about the traps of diplomacy. Lucifer flexes their power, showing off the strength hell possesses in sheer numbers. They repeat what Dream said about there being procedures that must be followed, showing the strength of hell’s surveillance network. And let’s not forget that little stunt with Nada. What better way to throw someone off their game than to fling an ex in their path?

The fact that Morpheus (or Kai’ckul, as Nada calls him) can hold a grudge for 10,000 years tells you everything you need to know about the guy. And the word he uses for what he hasn’t forgiven, that she defied him, is not great. That’s not a word we want bandied about a functional, egalitarian relationship. This is why workplace romances are frowned upon: The fallout always falls on the subordinate. In this case, being condemned to 10,000 years in hell. Sucks.

When Choronzon chooses Lucifer as his champion, it feels like the grand culmination of a very long game. Finding a way for the Lords of Hell and Nightmare to beef without a full-on war between their kingdoms takes a lot of groundwork to pull off. Lucifer and Dream play what he calls “the oldest game,” a.k.a. the wizard’s duel from Sword and the Stone. It’s a rap battle, in essence, big-upping yourself and demeaning the competition with metaphor. Dream and Lucifer get very existential in their moves. But in the end, just like the 2008 election, nothing can beat hope.

Dream reclaims his helm, but Lucifer pulls a fast one on him. Who said anything about him leaving? Having failed, diplomacy is thrown out the window in favor of brute force. But Dream reminds Lucifer and the hordes of hell, “What power would hell have if those here were not able to dream of heaven?” It’s one of the comic series’ biggest lines, and it’s delivered with a little too much mustard for my taste. The pause … for emphasis between “to dream” and “of heaven” is overselling the moment, but Tom Sturridge can probably be forgiven for making a meal of it.

The line is also, frankly, one hell of a bummer, suggesting that suffering would have no sting if humans didn’t dream of escaping it. For a text that high-key borrows from Christianity, Dream makes a rather Buddhist statement. It’s basically cribbed from the four noble truths — desire is the root of suffering. And in this show, Desire is definitely to blame for a lot of pain. A whole lot. But that’s later. Right now, the devil is converting to Buddhism and letting Dream leave hell unscathed, but not before vowing to one day destroy the Lord of Dreams. I hope Netflix lets the show go that long.

Between the scenes in hell, we’re treated to a very tense car ride. John Dee-slash-Cripps-slash-Burgess is getting a ride to his ruby from the woman who almost ran him over. To be honest, she’s lucky the eyeball amulet didn’t take the near hit-and-run as an act of aggression and blow up her entire car. But even with that small mercy, Rosemary and her dog Susie are having a bad night. She’s got a madman in her car, albeit a weirdly polite one.

John is on an anti-lying crusade, having determined that the big problem with him and his mom was that she lied a lot. And not, you know, the mind-destroying magical artifacts he was exposed to from a young age. Even Rosemary believes lying is just the worst. “I think lying is the worst thing you can do to a person,” she says, before finding out that hostage situations probably feel worse than being lied to. Other things that are worse than lies: really mean truths, getting shot, and when something bad happens to a dog. Thank God Susie leaves the show unscathed. I don’t think I could have taken her death after Gregory.

The stakes were technically higher in the duel between Dream and Lucifer, but as a viewer, I was infinitely more stressed watching Rosemary and John. That could be because her experience is more relatable. Any woman who’s done customer service has had to entertain the whims of someone who made her feel unsafe, whereas very few people in my life have ever had shapeshifting duels. I can count them on one hand. But it could also just be a function of how good David Thewlis is. You never know what side the coin is going to land on with him. The guy who assumed Remus Lupin was gay until he was told the guy was marrying Tonks — we have to stan. He brought such a slippery vibe to that character that even people who’d read the books were kept on tenterhooks during Prisoner of Azkaban. And his take on An Inspector Calls? Chef’s kiss.

Dream and John converge on the latter’s old storage facility. Dee has altered the ruby to the point that it no longer recognizes Morpheus as its creator. It knocks Dream out, allowing John to take it and begin his remodel of humanity, shaping the world into a more honest (and psycho) image. We’re about to find out what happens when people stop being polite and start being real.

• What kills hope? From personal experience, I’d say three years of a pandemic and a whole lot of news about celebrities’ private jets.

• This Lucifer is more in line with the comics representation than the version Netflix rescued from Fox’s trash heap. I think it really says something about the British psyche that when Neil Gaiman invented “the prettiest person ever who is also so cool and, like, maybe evil but maybe not that evil when you think about it,” his first thought was David Bowie.

• However, Gwendoline Christie’s wig is bad.

• Having Matthew give a little pep talk that gives Dream his eureka moment about how to beat Lucifer? Feels cheap. No, thank you.

• I can’t help but miss the way Sandman ties into the larger DC world. In the comics, Morpheus finds his ruby with the help of Martian Manhunter and Mister Miracle, as John was a third-tier Justice League villain called Doctor Destiny. Also, John escapes from Arkham instead of a generic facility in Buffalo, and the demon that guides Dream to the City of Dis is Etrigan. These connections to the larger comics world help Sandman feel more a part of a larger, freakier world. Just around the corner could be a biblical angel, the Joker, or whatever nonsense Doom Patrol happens to be up to at the time.

• The reference to dire wolves in the duel is comics-accurate, but did they really have to make Brienne of Tarth say it?

Keep up with all the drama of your favorite shows!