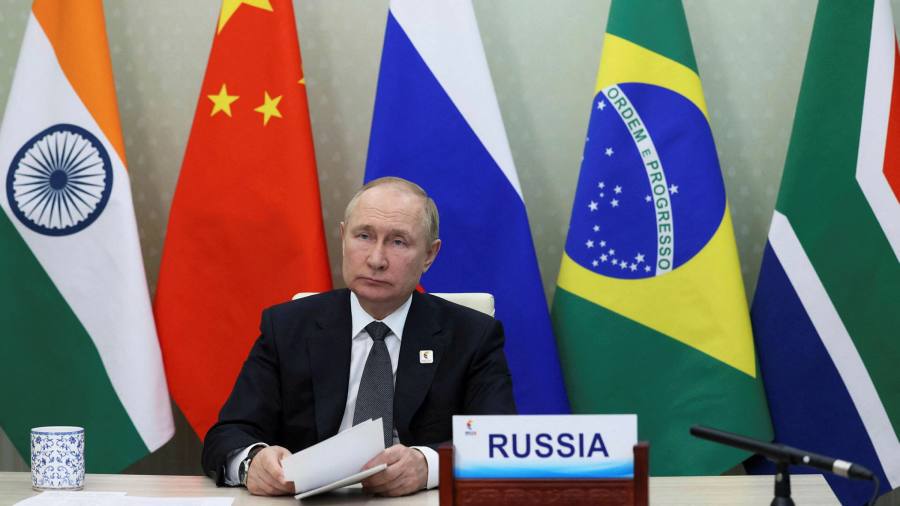 This article is an on-site version of our Swamp Notes newsletter. Sign up here to get the newsletter sent straight to your inbox every Monday and Friday

One of the most frustrating aspects of America’s Ukraine debate is its degree of self-deception about global unity. The assumption is false.

Vladimir Putin is hated and feared by most of the west, just as Volodymyr Zelenskyy is lionised. But the west has not been joined by most of the rest. When Indonesia hosts the G20 summit in November, Putin will be there in spite of Washington’s demand that Russia be expelled. Only four out of 55 African leaders attended Zelenskyy’s virtual address to the African Union, which had finally agreed he could speak to them after 10 weeks of asking. Not every summit is a western movie festival, where Zelenskyy has become a staple. And not everyone shares the US foreign policy establishment’s view that Putin is waging an existential war on democracy. I do not need convincing of the dark consequences of Putin’s late imperial agenda, nor of the necessity that he fails. But I’m not an Indian diplomat, an African consumer, or a Latin American energy importer. The west is not the world, and the world is not the west. It is astonishing such a truism has to be emphasised.

Here is rule number one of my unwritten primer on global diplomacy: Avoid navel-gazing. Good diplomacy sees things from other points of view and takes them into consideration. I fear that the US and the west in general are missing a big underlying reality in the global reaction to Putin’s barbarism: the Ukraine war is boosting demand for a multipolar world, which is very different to what we have been telling ourselves.

Most of the non-west craves strategic autonomy. They may be upset by the images from Bucha and Mariupol, just as we are troubled by footage of ethnic cleansing in Myanmar or bombed out cities in Syria. That doesn’t mean they will suspend their interests to stop it from happening, any more than we do when others cry out for help. To much of the world, Ukraine is just another humanitarian tragedy. The fact that the west sees it as existential is an irritation. Africans and Arabs and Latin Americans know that when there is a clash between US ideals and interests, the latter generally win. We should be wary of judging those who make similar trade-offs.

The world feels the Ukraine war primarily in two ways — higher food and energy prices. Following a pandemic in which emerging market growth collapsed and in which their debt to GDP ratios soared, inflation in basic staples is the last thing they need. If you add in rising US interest rates, we have the makings of the next emerging market payments crisis and rising political instability. We cannot blame countries such as India and Brazil for buying discounted Russian oil. Nor should we be surprised that there are plenty of takers for Russian grain. The fact that Putin is both blocking Ukrainian grain exports, and stealing what he can get his hands on, is a brutal reflection on Moscow’s ethics. But it does not alter others’ calculation. Hard economics trumps gauzy moralism. Joe Biden, after all, is about to travel to Saudi Arabia to press it for more oil production. This rips up two supposedly core tenets of Biden administration — reducing fossil fuels and shunning pariah autocracies.

The west’s speedy decoupling from Russia is bumping up against geopolitical limits. Countries such as China and India are helping create alternative payments systems and transportation routes for Russian commodities. They are also blocking western attempts to eject Russia from the multilateral system. The west’s best response to this would be to provide the kind of largesse to emerging markets on which China has long since taken the lead. Washington ought to spearhead efforts to boost global food security, arrange emerging market debt restructurings, and license Covid vaccine production (or better still, suspend patents) around the world. If we want the rest to follow us against Russia we must pay attention to what they want. Telling ourselves repeatedly that we are in a war of light versus darkness in which there is no middle ground is not a diplomatic strategy. Rana, do you share my frustration with western navelitis? If so, what is your cure?

Ed, I find myself in somewhat rare disagreement with you. I don’t think US policymakers are at all naive about the fact that we are heading towards a multipolar world. Indeed, it’s the working assumption of almost everyone I speak with. The sort of rhetoric that you are referring to, about light and dark, good and evil, is what I think of as political PR — the stuff of speeches for the masses.

Behind the scenes, the US trade representative is crafting a multipolar world trade policy (as I’ve written about here). Treasury secretary Janet Yellen is acknowledging that the Bretton Woods institutions are outdated for a multipolar world. Financial policymakers are grappling with a new multipolar world of finance. And everyone I know in Washington and the C-suite is trying to understand how a multitude of both public and private actors from various countries, cities and communities will engage, often as equals, in this new world.

How many poles there will be and who will lead them is certainly up for grabs. But I wouldn’t confuse rhetoric with policymakers’ understanding of reality.

In response to ‘Can we ever rouse people about global warming?’:
“The reality of the world is that selfish, rich, white men are still in charge. To get anything big changed requires motivating them. Decades of experience tell us that they are not motivated by tales of endangered animals or displaced poor people.

To solve this, find something that they do care about that will be affected by climate change. Perhaps its golf — the original course at St Andrews is coastal: is golf still golf if that history is eroded by rising sea levels? Perhaps it’s the major sports — are baseball and football still real if they can only be played indoors or in Alaska?” — Phil Willoughby, Seattle, Washington

“Your observation that sacrifice is not on anyone’s agenda does not only apply to the US. Beyond fringe groups it is not on anybody’s mind in the EU either. One reason is, I believe, that outside of war, managing sacrifice is not the strong suit of democracies. The challenge is to distribute pain equally throughout society so that citizens perceive their own share of pain as fair relative to the one of others. It’s somewhat akin to creating a fair tax system, only with the added difficulty of applying it to a shrinking instead of a growing cake.” — Arne Baumann, Berlin, Germany

Recommended newsletters for you

FirstFT Americas — Our pick of the best global news, comment and analysis from the FT and the rest of the web. Sign up here

Unhedged — Robert Armstrong dissects the most important market trends and discusses how Wall Street’s best minds respond to them. Sign up here