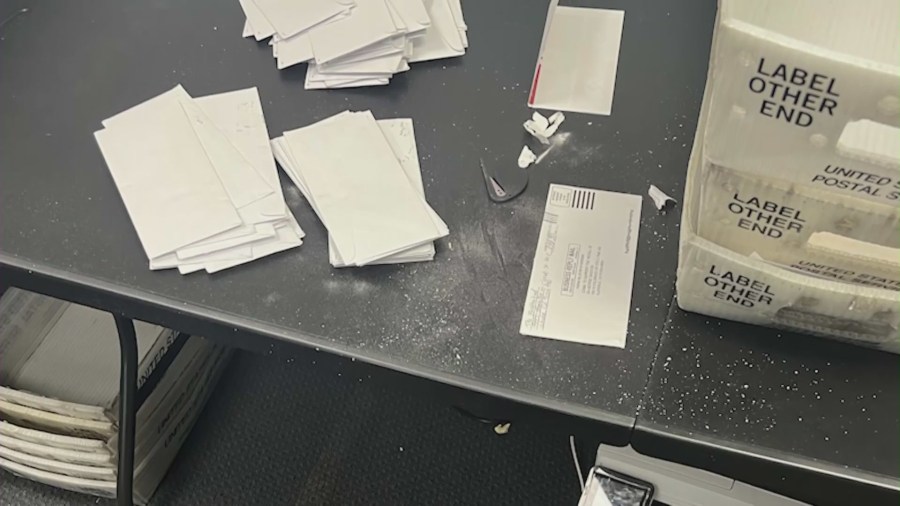 No injuries were reported after an office where organizers were working on the recall of Los Angeles County District Attorney George Gascón received a suspicious package.

Hazmat and fire crews temporarily shut down the floor at the office building on the 11800 block of Olympic Boulevard in Sawtelle and moved volunteers with the recall campaign to a different floor.

A volunteer told KTLA that the hate mail will not stop them from counting their signatures.

Around 4 p.m. Thursday, Tim Rosales, co-lead strategist for the Recall Gascón campaign, was sitting in the room next door when he heard the commotion and saw a petition that looked different from the thousands of others they’ve collected.

“Volunteer was opening up the petitions we got in the mail and one had white substance got all over everything, and got all over the volunteer,” Rosales told KTLA.

The envelope with a white unidentified powder was sent to the office along with swastikas and an antisemitic message that read, “please send your petition to Adolf Hitler [expletive].”

“We have no idea what the intention was or motivation behind it,” Rosales said. “We just turned everything over to the LAPD.”

Everyone who was in direct contact with the substance was tested, but Rosales said all of the volunteers were fine and most went right back to counting petitions from the floor above.

Investigators have not said what the substance was or who it came from, but the investigation is ongoing.

The recall efforts against Gascón have intensified in recent days. Just last week, two El Monte police officers were gunned down by a criminal some believe should have been behind bars if not for the DA’s policies. Gascón has defended his practices, saying the suspect had no history of violent crime before the shooting.

As of right now, the recall effort continues to grow, and organizers say they have collected more than the 566,000 signatures needed, but the campaign says more are coming.

“Right now, we feel like momentum and passion is on the side of those who want a recall, but certainly there are people who have bad intentions,” Rosales said.

Gascón’s office has not commented on the incident at this time.